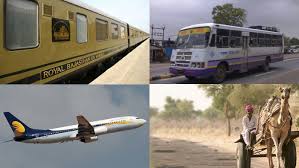 Transport, an important component of the tertiary sector is of immense significance in a country’s economic development. With the advancements complexities and sophistication of the modern world, a country cannot think of attaining economic

A number of national highways join Rajasthan to the other parts of India. The most famous highway in the state is National Highway 8. It is the oldest highway with 4-8 lanes in the country. The road network of Rajasthan is highly impressive and called as Rajasthan State Highway or “RJ SH”. In total there are 20 National Highways which extend to 5,713 km together with 85 State Highway which are extended up to 11,716 km.

The state houses one inter-city surface transport infrastructure comprising bus services and railways. All the major cities in the state are joined by railways, flights, and roadways.

Rajasthan is sufficiently linked with all the major cities in India like Ahmedabad, New Delhi, and Indore through both National and State Highways.

The national highways system in Rajasthan encompasses an overall span of 5,585 km. The NH8, the most well-known highway in the state, joins major cities such as Ajmer, Jaipur, Udaipur, and Chittorgarh. The length of the NH 8 is around 688 km inside the borders of the state.

At present, the number of state highways in the state is 85 and the combined span of these thoroughfares is 11,716 km.

The state is well joined with a roadways network spanning 150,876 km that runs across the state.

Given below are the names of the national highways in Rajasthan:

The state is blessed with 6 airports out which 2 are accessed by the national operators and one belongs to the Indian air force.

Jaipur international airport is a huge entity with all the basic amenities available to the travelers. It is located in the southern direction of the city.

The domestic airport at Jodhpur is at a distance of 5 Km from the city.

It is a domestic airport and is located about 22 km away from the city.  It is one of the busiest airports because it receives flights from different sources such as Delhi, Mumbai, Jaipur along with Jodhpur.

Domestic airport of Kota was functional till 1997 when it was closed down due to the lack of flight, however private operators conduct flight on this route.

It is located 9 km away from the city; however it is only open for Indian Air force and its fighter planes.

The airport at Bikaner is under construction and would be soon in operation. It is situated 17 km away from the city.

The central government has allocated funds for the construction of low budget airports at Alwar, Kota and Bhilwara. These towns are known for their artistic works and many tourists come from all over the world to buy the products. Often they have to travel by road which is costly and cumbersome. Ajmer would soon have its own airport due to its proximity to the dargah and the pushkar temple.