Telangana is situated largely in an upland region of the Deccan (peninsular India). Much of its surface area is occupied by the Telangana Plateau in the north and the Golconda Plateau in the south and is composed of gneissic rock (gneiss being a foliated rock formed within Earth’s interior under conditions of heat and pressure). The average elevation of the plateau area is about 1,600 feet (500 metres), higher in the west and southwest and sloping downward toward the east and northeast, where it meets the discontinuous line of the Eastern Ghats ranges. Drainage is dominated by the basins of the Godavari River in the north and the Krishna River in the south. As a result of erosion, the topography of the plateau region consists of graded valleys with red sandy soil and isolated hills. Black soil is also found in certain parts of the area. 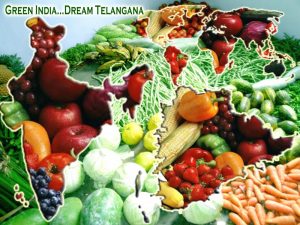 After decades of movement for a separate State, Telangana was created by passing the AP State Reorganization Bill in both houses of Parliament. Telangana is surrounded by Maharashtra and Chhattisgarh in the North, Karnataka in the West and Andhra Pradesh in the South and East directions. Major cities of the state include Hyderabad, Warangal, Nizamabad and Karimnagar.

Telangana has three seasons: summer, from March to June; a period of tropical rains from July to September; and winter, from October to February. Summers are warm to hot and dry, with temperatures often nearing or exceeding 100 °F (38 °C). Annual precipitation, which derives largely from the rainy southwest monsoon winds, varies somewhat across the state. It averages about 35 inches (900 mm) per year, although the annual total often varies considerably from the average and can be as little as 20 inches (500 mm) in drier areas. Average minimum temperatures in Hyderabad reach about 60 °F (15 °C) in January and February and usually read in the low 50s F (about 10 to 12 °C) at higher elevations.

Thorny vegetation covers the scattered hills of the plateau areas, while dense woodlands are found in the northeast along and near the Godavari River. The forests, covering about one-fourth of the land area, consist of both moist deciduous and dry savanna vegetation; teak, rosewood, wild fruit trees, and bamboo are plentiful. Elsewhere in the state, neem (which produces an aromatic oil), banyan, mango, and pipal (or Bo; Ficusreligiosa) are among the common trees.

Animal life includes tigers, blackbucks, hyenas, sloth bears, gaurs, and chital, which abound in the hills and forest areas. There are also hundreds of species of birds, including flamingos and pelicans. Telangana is home to some two dozen national parks, wildlife sanctuaries, and protected areas, including two tiger reserves that adjoin similar facilities in neighbouring states.

According to this study, the ‘Flora of Telangana State’ comprises 1911 taxa of flowering plants distributed within 893 genera and 162 families.

VEGETATION TYPES of Vegetation of Telangana: