Wild Life and Ecotourism of Telangana

Wild Life and Ecotourism of Telangana

Telangana has rich forests and wild life sanctuaries, which provide scope for eco-tou 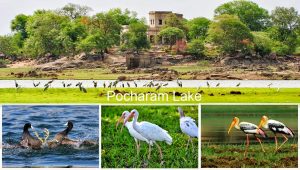 The tourism in the present day, has become increasingly significant and organized (industry) as moreand more people with increased disposable income, higher propensity to spend and changing socialmores trot cities and countries due to variety of reasons. Along with the evolution of tourism, its definitionhas also formalized over the years and in the present parlance a visitor is considered to be a traveller taking a trip to a main destination outside their usual environment, for less than a year, for any mainpurpose (business, leisure or other personal purpose) other than to be employed by a resident entityin the country or place visited A visitor (domestic, inbound or outbound) is classified as a tourist (orovernight visitor), if his/her trip includes an overnight stay, or as a same-day visitor (orexcursionist) otherwise. A traveler on the other hand is someone who moves between differentgeographic locations, for any purpose and any duration. The visitor is a particular type of traveller andconsequently tourism is a subset of travel. However, “Tourism” refers to all activities of visitors, includingboth “tourists (over-night visitors)” and “same-day visitors”.In the context of Telangana, its culture combines cultural customs from Persian traditionsembedded during Moghuls, QutubShahis and Nizams rule with prominent and predominantlysouth Indian traditions and customs. The State has a rich tradition in classical music. It has a richpainting and folk arts such as Burrakatha, shadow puppet show, and Perini Shiva Tandavam, GusadiDance, Kolatam etc. Telangana has a variety of tourist attractions including historical places,monuments, forts, waterfalls, forests and temples. Lakhs of tourists, including foreign tourists visitthese tourist attractions every year and carrying their experiences, customs and traditions of Indianheritage, sweet memories to their native states or countries

Telangana has a tremendous potential for Rural Tourism and is a fascinating canvas of myriadcolors, cultures and customs. Handicrafts represent, perhaps, the oldest traditions of living culture andTelangana has some of the richest sources of handicrafts

Telangana is a historic land dotted with a number of forts, which have a potential to be developedinto classic heritage tourism sites. Some famous forts, where Tourism Department is taking up projectsto develop amenities for tourists are Golconda Fort, Medak Fort, Khammam Fort, Nizamabad Fort,Elagandula Fort, Karimnagar and Bhongir Fort, Nalgonda. Warangal Fort and Golconda Fort also hostSound and Light shows which take us back to a magnificient past. More shows of this kind willhighlight the rich heritage of Telangana. Telangana State Tourism Development Corporation (TSTDC)organizes all the above tourist packages and also connects the neighboring States. TSTDC alsomaintains Haritha Hotel chains, wayside amenities, river cruises and water fleet in different locations. Anytrip to Telangana State is incomplete without a taste of its cuisine, including the famous HyderabadiBiryani, Qubani-ka-Meetha, Haleem,Osmania Biscuits and Irani Chai.