The paintings of Rajasthan have two different colors to their style — the former school of miniature paintings whose growth intensified in courts all over north India and the Deccan, and the folk style which is unique to Rajasthan. The glorious 16th century saw the rise in different schools of paintings such as the Mewar school, the Bundi-Kota Kalam, the Jaipur, Bikaner, Kishengarh and the Marwar schools. Miniature paintings are made in Mughal or Rajasthani styles. The Rajasthani miniatures are different from the Mughal ones in terms of color and compositions. They use bright colors and bold compositions and touch several themes such as the kings, religion, and secular whereas the Mughal miniatures were restricted to court scenes and emperors. The most admired Rajasthani painting is one depicting Krishna Leela. Pichhwais of Nathdwara are purely dedicated to Lord Krishna.

The Rajasthani Paintings are broadly of two type viz. Courtly and Literary. The paintings of courtly type include the portraits of the rulers holding different states of Rajputana. Most of these rulers have been depicted either as holding the courts or doing some past time such as hunting. The literary paintings on the other hand show the intimate connection with the poetry. These are the illustrated versions of some of the important literary works such as Amar-Sataka, Sur Sagara, Rasamanjari, Rasikpriya etc.

The folk style of paintings is divided into two styles. Phads—they are in the form of a scroll painted on a big canvas. They depict the legends of Pabuji Ramdeo of the Rabari tribe, and his black mare. The colors used are bright orange, red and black. Pichwais—they are decorative curtain cloths used as a background for divine images or idols in a place of worship. The styles vary from brocaded, block printed, embroidered or golden thread work.

Mewār painting, one of the most important schools of Indian miniature painting of the 17th and 18th centuries. It is a school in the Rājasthanī style and was developed in the Hindu principality of Mewār (in Rājasthān state). The works of the school are characterized by simple bright colour and direct 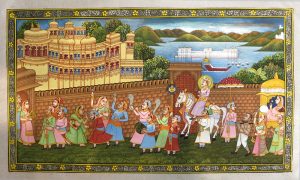 emotional appeal. The comparatively large number of paintings to which dates and places of origin can be ascribed make possible a more comprehensive picture of the development of painting in Mewār than in any other Rājasthanī school. The earliest-dated examples come from a rāgamālā (musical modes) series painted in 1605 at Chawand, an early capital of the state. This expressive and vigorous style continued with some variations through 1680, after which time Mughal influence became more apparent. One of the outstanding painters of the early phase was the artist Sāhibdīn.

The Mewār school continued through the 18th century and into the 19th, the production being fairly prolific. An increasing number of paintings were concerned with portraiture and the life of the ruler, though religious themes continued to be popular.

Būndi painting, important school of the Rājasthanī style of Indian miniature painting that lasted from the 17th to the end of the 19th century in the princely state of Būndi and its neighbouring principality of Kota.

The earliest examples (c. 1625) show Rājasthanī features, particularly in the depiction of men and women, but Mughal influence is exceptionally strong. In richness and brilliance Būndi painting has an affinity also with the painting of the Deccan, an area with which the rulers of Būndi and Kota were often in contact.

The Būndi school is characterized by a fondness for lush vegetation, dramatic night skies, a distinctive way of depicting water by light swirls against a dark background, and vivid movement. The school reached its peak during the first half of the 18th century but continued to flourish into the 19th century and had a brilliant phase at Kotah during the reign of Rām Singh II (1828–66). These vigorous paintings depict royal tiger hunts in the thick and hilly jungle of the region and various aspects of the life of the king.

Mālwa painting, 17th-century school of Rājasthanī miniature painting centred largely in Mālwa and Bundelkhand (in modern Madhya Pradesh state); it is sometimes referred to as Central Indian painting on the basis of its geographical distribution. The school was conservative, and little development is seen from the earliest examples, such as the Rasikapriyā (a poem analyzing the love sentiment) series dated 1636 and the Amaru Śataka (a Sanskrit poem of the late 17th century), now in the Prince of Wales Museum of Western India, Bombay. Little is known of the nature of the school in the 18th century.

Mālwa paintings show a fondness for rigorously flat compositions, black and chocolate-brown backgrounds, figures shown against a solid colour patch, and architecture painted in lively colour. The school’s most appealing features are a primitive charm and a simple childlike vision.

Kishangarh painting, 18th-century school of the Rājasthanī style of Indian painting that arose in the princely state of Kishangarh (central Rājasthān state). The school is clearly distinguished by its individualistic facial type and its religious intensity. The sensitive, refined features of the men and women are drawn with pointed noses and chins, deeply curved eyes, and serpentine locks of hair. Their action is frequently shown to occur in large panoramic landscapes.

Though competent paintings similar in style to late Mughal art were perhaps being done in Kishangarh at the end of the 17th century, the brilliant series of paintings on the Rādhā–Krishna theme were due largely to the inspiration of Raja Sāvant Singh (reigned 1748–57). He was a poet, also, who wrote under the name of Nagari Dās, as well as a devout member of the Vallabhācārya sect, which worships the lord in his appearance on Earth as Krishna, the divine lover. Sāvant Singh fell in love with a singer in the employ of his stepmother called Bani Thani (“Lady of Fashion”), and it is speculated that her features may have been the model for the Kishangarh facial type. The master artist largely responsible for transmitting the romantic and religious passions of his patron into new and fresh visual images was Nihal Chand.

Dhundhar is a historical region of Rajasthan state in western India. It includes the districts of Jaipur, Sawai Madhopur and Tonk. In ancient times, the regions in and around Jaipur were known as Dhundar. Most parts of Alwar, Jaipur, and Shekhawati are still called Dhundar Pradesh.

The Dhundar school of paintingswas much popular for its exclusive folk art paintings.

The miniature paintings of these two centers are superb creations and typically portraying beautiful women with round faces, large eyes, long neck and pointed nose. The haunting activities of the erstwhile ruler and emperor’s are depicted in these paintings.