personalities who have effectively worked on environment conservation to

ÿ Pannadhay Award – This special award is bestowed to those exceptional

others while risking their own life.

the society with their spiritual and religious guidance.

sparked awareness in society through historical and literature get this state

from various background like painting, traditional art are honored with this

name, this award is for musicians with extra ordinary talent and contributed in

development of Scheduled Tribes of Rajasthan.

success in the field of sports are awarded with Aravali Award.

ÿ For his work Neeb ke cheer se and parityakt

Sports award, given after 8 years gap to :-

– biggest cricket award of the state

– is awarded to Forest protection and conservation authority suratgarh,Udaipur

– This award is given for significant contribution in the field of wildlife protection,

which is recognised as having shown exemplary courage or having done

exemplary work for the protection of wildlife.

– awarded to shriganganagar, runner up was hanumangarh

– given by rajasthan association of north america

– awarded to pawan pahardiya of nagore

– in the field of excellence in Cooperate social responsibility

– given to 8 panchayati raj institutes of the state

– Award to Gram Panchayats for good work in the implementation of

MGNREGS activities (To be awarded by MoRD

– by Travel plus lazer India and south asia magzine

awarded to international consortium of investigative journalists and Indian Express

award money is 11,000$ which is largest in award money

– he is international advisor to UN project

– he is the 1st rajasthani to be awarded

to jhumpa lehri during Jaipur literature festival , award money is 50.000$

– by assocham, awarded to rajasthan

4th time in a row to rajasthan.

– To rameshchandra shah in hindi literature for his noble Vinayak

– awarded to Narbada Indoriya of Information and broadcasting department.

– he is the editor of magazine Sujan

– Indian literacy mission is active in 32 districts of the state.

– sikar district is selected for the award

Para-sports person of the year award 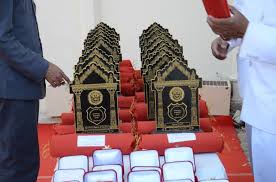