There are many Eminent Players of India who have named India in the world and left a different mark.Who have given different models to India in their respective sports

Anup Sridharis a Eminent Players of India, he is the 23 years old National Badminton Champion, made a triumphant mark in the year 2005 in the 30th. 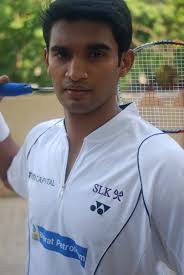 Hungarian International. Winning this prestigious international tournament, Anup Sridhar attracted the attention of many a famous badminton personalities.  Anup Sridhar reached the quarter final of BWF World Championships in the year 2007 where he played against Lin Dan – one of the top seeds. Being a National Champion for two times, Anup Sridhar has become one of the most popular badminton players of India.

Some of the major achievements of Prakash Padukone in the field of badminton are listed below:

Saina Nehwal, an Indian badminton player, was born on 17 March 1990 in Hisar District, Haryana. She is currently ranked number 1 in the world by the Badminton World Federation and is the first Indian woman to achieve this feat. She is also the first Indian to win the World Junior Badminton Championships and a medal in Badminton at the Olympics. She won a Bronze medal at the 2012 London Olympics, becoming the second Indian women to win an individual medal at the sports event. She is supported by the Olympic Gold Quest.

Saina started her badminton training under the apt guidance of S.M. Arif, who was a Dronacharya Awardee. She is currently coached by Indonesian badminton legend Atik Jauhari along with the former all England champion and national coach Pullela Gopichand as her mentor. Being born to Harvir Singh Nehwal, who is a scientist at Directorate of Oilseeds Research and Usha Nehwal, Saina Nehwal has always received the support of her family members.

Saina Nehwal trains at Pullela Gopichand Academy in Hyderabad. From her initial years as a badminton player, she has always shown a lot of potential in herself. Being a National Junior champion, she has performed well in major tournaments, both in national and international ones. She has clearly made a mark of her own.

In 2006, Saina Nehwal became the first Indian woman to win a super-series tournament, the Philippines Open. In 2008, she became the first Indian to win the World Junior Badminton Championships. She also won the 2008 Chinese Taipei Open Grand Prix Gold, the Indian National Badminton Championships and the Commonwealth Youth Games in the same year. She was declared as the most promising player in 2008.

In the 2012 London Olympics, Saina Nehwal won a bronze medal and became the first Indian to win an Olympic medal in badminton. For her huge achievement the state governments of Haryana, Rajasthan and Andhra Pradesh offered her huge cash prizes and the Sports Minister promised Saina a job equivalent to the rank of an IAS officer. Her success at the Olympics has surely opened new doors for sports to grow in India.

Mary Kom is an Indian boxer from the northeast state of Manipur, born on 1st March 1983, Mangte Chungneijang. She is also known as MC Mary Kom or Magnificent Mary. Mary Kom is famed as a five-time World Boxing Champion and the only boxer to win a medal in every one of the six world championships. In the 2012 Olympics, she became the first Indian women boxer to qualify and win a bronze medal in the 51 kg flyweight category of Boxing. She is currently ranked as Number. 4 in the Flyweight category of AIBA World Women’s Ranking.

Mary Kom’s career started in 2000 after her victory in the Manipur state women’s boxing championship and the regional championship in West Bengal.

Anju Bobby George (born 19 April 1977) is a renowned Indian athlete. She is a most Eminent Players of India.She is a recipient of many sports honours at both national and international levels. Currently, she is the Chairperson of Target Olympic Podium Scheme(TOPS) and is also the Khelo India project ‘s Executive member.

In 1999, she set the national record for triple jump in the Bangalore Federation Cup. She improved on her own record in the National Circuit Meet at Thiruvananthapuram. She won the gold medals in the triple jump and long jump in the Ludhiana and Hyderabad National Games. She won the gold medal at the Asian Games in Busan, South Korea. Anju Bobby George hit headlines in 2003 when she won the bronze medal (Long Jump, jumping 6.7 m) at the 2003 World Championships in Athletics. This made her the first India to win a medal at the World Championships in Athletics. Her personal best was a jump of 6.83 m at the 2004 Summer Olympics at Athens, but it fetched her only the sixth position. Her other victories include a silver medal in women’s long jump in the Doha Asian Games, 2006.

Kapil Dev Ramlal Nikhanj is a Eminent Players of India and  also known by other name is “The Haryana Hurricane” was born on 6 January 1959 in Chandigarh. He led India to their first and only World Cup title in 1983 and was named by Wisden as the Indian Cricketer of the Century in 2002. Kapil Dev made his international cricket debut against Pakistan at Faisalabad in 1978-79.

He was a very successful bowler. Kapil became the second bowler ever to take 400 wickets in Test cricket in 1991. He went on to become the highest Test wicket-taker in the world in 1994, a record which was broken by Courtney Walsh in 1999. Kapil’s name has entered the record books for being the only player to have scored 4,000 Test runs and taken 400 Test wickets. In 1988, Kapil becomes the highest wicket-taker in ODI cricket before his record was broken by Wasim Akram in 1994.

A very attacking player, he loved to take the fight to the opposition’s camp. One of his most memorable innings was in a match en route to the World Cup final of 1983 when he scored 175 not out against Zimbabwe, rescuing India from a precarious position at 17/5 and finally turning the game in India’s favour.

Sachin Ramesh Tendulkar is a former cricketer and captain of the Indian team.He is also a Eminent Players of India and proud of Indians. The world famous cricketer had set many records in his career and is considered one of the greatest batsmen of all times. He is the cricketer with most centuries scored among all the cricketers and he is the only one to score more than 30,000 runs in the game.

Ashwini Nachappa is a former athlete and an Indian film actress from Karnataka. She gained popularity during the 1980s after outrunning P.T. Usha on two separate occasions. She is popularly known as ‘Flo Jo’, or ‘Florence Griffith Joyner of India’. Like Flo Jo, Nachappa was known for her performances in the field along with her glamorous appearance. Her popularity and glamour-queen outlook brought her many film proposals, which she later accepted, only to become a well-known film actress in ‘Tollywood’, the south Indian film industry. She was honored with the Arjuna Award in the year 1990. She is also a social worker and an educationalist besides being an entrepreneur (she runs her own school). Currently, she is the president of the Bangalore Urban District Athletics Association.