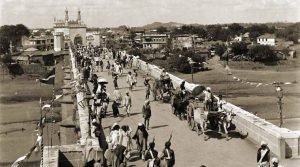 Mulki Rules were implemented by the Nizam in 1919 to protect education and job opportunities of Telangana residents in Hyderabad state.
The Telengana area formerly was a part of the State of Hyderabad. The Hyderabad State comprised to three linguistic areas, Telegana, Marathwada and Karnatak.

In 1919 the Nizam issued a Fireman promulgating what has come to be known as Mulki rules. These rules were contained in Appendix ‘N’ to the Hyderabad Civil Service Regulations. In fact the terms ‘Mulki’ and ‘Mulki rules’ were used in Rule 39 of the said regulation. Appendix ‘N’ provided who should be considered Mulki for purpose of appointment to any service in the former State of Hyderabad.

Under the 1919 Constitution, the ruler exercised sovereign authority over the serves. In accordance with the 1919 Firman, Hyderabad Civil Service Committee was established and as a personnel agency it played a significant role in the management of civil services. It was independent in its functioning and no attempt was made to bring pressure on the decision-making process of the Committee. It was a multifunctional agency and closely associated with all aspects of Hyderabad Civil Service. It had to conduct examinations for the selection and placement of the candidates for the various vacancies in different departments.

Mulki is a Persian word and means countrymen. The origin of the Mulki issue can be traced to the migration of Muslims to the Deccani plateau during the medieval period. The first wave of Muslim migrants came to Deccani Plateau during the rule of the Bahamani Sultans and called themselves Mulki. The next wave of Muslim migration took place during the rule of the QutbShahis and they were called as Gair-Mulkis or Afakis. However, the issue of Mulki and non-Mulki came to prominence during the Nizam rule.

A person shall be called a Mulki if:
(a) By birth he is a subject of Hyderabad State; or
(b) By residence in the Hyderabad State he has been entitled to be a Mulki; or
(c) His father having completed 15 years of service was in the Government service, at the time of his (child’s) birth; or
(d) She is a wife of a person who is a Mulki.

Further A person shall be called a Mulki who has permanent residence in the Hyderabad State for at least 15 years and has abandon one the idea of returning to the place of his previous residence and has obtained a Certificate to that effect on a prescribed form attested by a Magistrate.