Due to his seminal role in the framing of the Indian Constitution, Dr Bhimrao Ambedkar is popularly known all over India as the chief architect of the Indian Constitution. His efforts to eradicate social evils were remarkable and that is why he is called the “messiah” of the Dalits and downtrodden in India. Dr Ambedkar was appointed the Chairman of the Constitution Drafting Committee. The text prepared by Ambedkar provided constitutional guarantees and protections for a wide range of civil liberties for individual citizens, including freedom of religion, the abolition of untouchability and outlawing all forms of discrimination. Ambedkar argued for extensive economic and social rights for women, and also won the Constituent Assembly’s support for introducing a system of reservations of jobs for members of the SC and ST. Ambedkar kept the clauses of the Constitution flexible so that amendments could be made as and when the situation demanded. He provided an inspiring Preamble to the Constitution ensuring justice, social, economic and political, liberty, equality and fraternity. The creation of an egalitarian social order, however, remains an unfulfilled wishful thinking to this day.

Dr Ambedkar was not only a learned scholar and an eminent jurist but also a revolutionary who fought against social evils like untouch-ability and caste restrictions. Throughout his life, he battled social discrimination while upholding the rights of the Dalits and other socially backward classes. He was not only a great national leader but also a distinguished scholar of international repute. He not only led various social movements for the upliftment of the depressed sections of the Indian society but also contributed to the understanding of the socio-economic and political problems of India through his scholarly works on caste, religion, culture, constitutional law and economic development. As a matter of fact he was an economist and his various scholarly works and speeches indicate his deep understanding of the problems faced by the Indian society. He was appointed as the nation’s first Law Minister and was posthu-mously awarded the Bharat Ratna in 1990-91.

On August 29, 1947 Dr. Ambedkar was appointed the Chairman of the Drafting Committee that was constituted by Constituent Assembly to draft a Constitution for independent India. The draft Constitution was the result of the collective efforts of a galaxy of great leaders and legal scholars in the Constituent Assembly such as Jawaharlal Nehru, Rajendra Prasad, B.R. Ambedkar, Sardar Patel, B.N. Rao, Alladi Krishnaswamy Ayyar etc. The purpose of this paper is to examine the contribution of Dr Ambedkar only to the Indian Constitution.

Dr Ambedkar played a seminal role in the framing of the Indian Constitution. He used all his experience and knowledge in drafting the Constitution. In his capacity as the Chairman of the Drafting Committee, he hammered out a comprehensive workable Constitution into which he incorporated his valuable views. He gave free India its legal framework, and the people, the basis of their freedom. To this end, his contribution was significant, substantial, and spectacular. Dr Ambedkar’s contribution to the evolution of free India lies in his striving for ensuring justice—social, economic and political—for one and all. 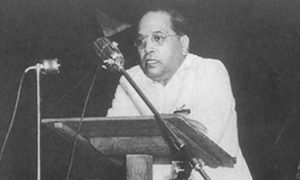 Ambedkar was a champion of fundamental rights, and Part III of the Indian Constitution guarantees the fundamental rights to the citizens against the state. Some of the fundamental rights contained in Articles 15(2), 17, 23, and 24 are also enforceable against individuals as they are very significant rights relating to the prohibition of discrimination on grounds of religion, race, caste, sex or place of birth etc. The text prepared by Ambedkar provided constitutional guarantees and protections for a wide range of civil liberties for individual citizens, including freedom of religion, the abolition of untouchability and outlawing all forms of discrimination. Ambedkar argued for extensive economic and social rights for women.

Dr. ambedkar was a strong advocate of the parliamentary form of government right from the inception of the Government of India Act of 1935. He firmly believed that the parliamentary system of government alone can usher in an egalitarian society through the application of the principles of social democracy. Dr Ambedkar’s social democracy comprised politicians, political parties with high standards of political morality, honesty and integrity and strong and highly responsible Opposition party or parties committed to the cause of the downtrodden and depressed classes. The Preamble of the Indian Constitution echoes the principles of parliamentary democracy.

The real contribution of Ambedkar is reflected in the protective discrimination scheme or the reservation policy of the government envisaged under some provisions of Part III and many of Part IV dealing with the constitutional mandate to ameliorate the condition of the Scheduled Castes and Scheduled Tribes and the other backward classes. Provisions like Article 17 prohibiting untouchability, Article 30 dealing with the protection of minorities are some of the notable examples.  Articles 15(4) and16(4) of Part III and Part XI, and Schedule V and VI dealing with the upliftment of the Scheduled Castes and Schedule Tribes speak clearly about the substantial and significant contribution of Ambedkar for the development of untouchables.5 Ambedkar made it his life’s mission to uplift the untouchables and other downtrodden masses from the unequal position of inferiority to that of equal position of parity in socio-economic status with high-caste Hindus. For achieving this goal the reservation policy or the scheme of protective discrimination was advocated and implemented by him for ten years at least to ameliorate the conditions of the various depressed and down-trodden sections of Hindu society.