Princely states and zamindars of Telangana

Hyderabad State  (also known as Hyderabad Deccan, was an Indian princely state located in the south-central region of India with its capital at the city of Hyderabad. It is now divided into Telangana state, Hyderabad-Karnataka region of Karnataka and Marathwada region of Maharashtra. The state was ruled from 1724 until 1948 by a hereditary Nizam who was initially a Mughal governor of the Deccan before becoming independent. Hyderabad gradually became the first princely state to come under British paramountcy signing a subsidiary alliance agreement. After the Partition of India, Hyderabad signed a standstill agreement with the new dominion of India, continuing all previous arrangements except for the stationing of Indian troops in the state. However, with the rise of militant razakars, India found it necessary to station Indian troops and invaded the state in September 1948 to compel the Nizam.

Hyderabad State was founded by Mir Qamar-ud-din Khan who was the governor of Deccan under the Mughals from 1713 to 1721. In 1724, he once again resumed rule under the title of Asaf Jah. His other title Nizam ul-Mulk (Order of the Realm), became the title of his position “Nizam of Hyderabad”. By the end of his rule, the Nizam had become independent from the Mughals, and had founded the Asaf Jahi dynasty. Following the decline of the Mughal power, the region of Deccan saw the rise of Maratha Empire. The Nizam himself saw many invasions by the Marathas in the 1720s, which resulted in the Nizam paying a regular tax (Chauth) to the Marathas. The major battles fought between the Marathas and the Nizam include Palkhed, Rakshasbhuvan, and Kharda, in all of which the Nizam lost. Following the conquest of Deccan by Bajirao I and the imposition of chauth by him, Nizam remained a tributary of the Marathas for all intent and purposes. From 1778, a British resident and soldiers were installed in his dominions. In 1795, the Nizam lost some of his own territories to the Marathas. The territorial gains of the Nizam from Mysore as an ally of the British were ceded to the British to meet the cost of maintaining the British soldiers.

Hyderabad was an 82,000 square mile (212,000 km²) region in the Deccan, ruled by the head of the Asif Jahi dynasty, who had the title of Nizam and on whom was bestowed the style of “His Exalted Highness” by the British. The last Nizam, Osman Ali Khan, was one of the world’s richest men in the 1930s. Hyderabad’s Muslim nizams ruled over a predominantly Hindu population. In 1798, Nizam ʿĀlī Khan (Nizam Ali Khan Nizam-ul-Mulk (Asaf Jah II)) was forced to enter into an agreement that put Hyderabad under British protection. He was the first Indian prince to sign such an agreement. Consequently, Hyderabad was the senior-most (23-gun) salute state during the period of British India. The Crown retained the right to intervene in case of misrule. Hyderabad under Nizam Ali Khan(Asif Jah II) was a British ally in the second and third Maratha Wars (1803–05, 1817–19), and remained loyal to the British during the Indian Rebellion of 1857 (1857–58). The Nizam Mīr Us̄mān ʿĀlī (Ruled 1911–48) was given British titles. Hyderabad was considered backward, but peaceful, during this time.

In 1947 India gained independence and Pakistan came into existence; the British left the local rulers of the princely states the choice of whether to join one or the other, or to remain independent. On 11 June 1947, the Nizam issued a declaration to the effect that he had decided not to participate in the Constituent Assembly of either Pakistan or India. India insisted that the great majority of residents wanted to join India. The Nizam was in a weak position as his army numbered only 24,000 men, of whom only some 6,000 were fully trained and equipped. On 21 August 1948, the Secretary-General of the Hyderabad Department of External Affairs requested the President of the United Nations’s Security Council, under Article 35(2) of the United Nations Charter, to consider the grave dispute, which, unless settled in accordance with international law and justice, is likely to endanger the maintenance of international peace and security.

The governors of the Vijayanagara Empire, who were under the direct control of central government, ruled the provinces and feudatory kings. The feudatory kings were called “Nayakas” and paid tribute to the emperor who ruled the kingdoms. The Vijayanagara Empire was destroyed in the Tallikota war of 1565 AD, when Muslim states (Golconda, Bijapur, Ahmednagar, and Bidar) came together against the empire. Tributary kingdoms that were under Vijayanagara Empire came under the control of Sultans of Golconda and Bijapur. These Golconda and Bijapur Sultans employed subservient people from Balija, Reddy, Kamma and Velama shudras castes as kings (instead of the Kshatriya kings whom they perceived as a threat, due to their royal lineage & ambitious tendencies to fight for rule) as the rulers of kingdoms and had them to pay the tribute and collected revenue. Thus many more of these kingdoms/provinces, also known as Samsthanams or Zamindaris, came into being. 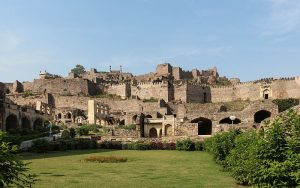 The Golconda Empire came under the control of the Mughal Dynasty in 1686 and became to be known as the Deccan Suba. The rule of the Mughal Dynasty didn’t last long. Nizamul Ul Mulk Asaf Jah, as the governor of the Deccan, controlled the present state of Andhra Pradesh and parts of Maharashtra and Karnataka. In the beginning the French had influence over Hyderabad. However, Salabat Jang, who came to power after his father, realized that the French were losing ground to British and so realigned himself with the English. In 1761, the East India Company helped Nizam Ali Khan to depose his brother Salabat Jang and helped him occupy the Deccan Suba. The East India Company then took Andhra regions for lease from Nizam Ali. Later, by accords of 1768 and 1779 these Andhra regions came under complete control of East India Company, whereas Telangana states remained under Nizam. In 1802, the British government under a Permanent Revenue Settlement agreement restored the ruling powers and rights of kings of Andhra regions. During this time, rich and influential people became rulers (zamindars) to the city-states (zamindaris). In the beginning, the British allowed old kingdoms to have armies with the condition that they would support the British Empire during the war. However, this right was abolished and these kings were reduced to the level of zamindars. These feudal kingdoms/zamindaris were abolished after the formation of the Indian Union, a democratic republic.