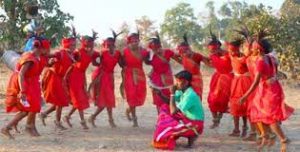 Music, rhythm and lyrics are given prime importance in folk songs. Villagers sing while working in the field and gain vigour. Some songs are devotional or philosophical too. The Folk songs of Telangana are a mirror to traditions and culture of Telangana. Mothers sing lullaby for their children to put them to sleep. One such song is — Jo Atchutananda jojo mukunda-raara paramaananda Rama Govinda.

Folk songs of Telangana are also sung when villagers desire to pray to their Gods for rains and while ploughing the fields and sowing seeds in order to reap a good harvest. For instance, this folk song is sung while sowing seeds in the field in Telangana –

Folk music is said to have had an impact on the State hood movement too as it helped people to come together during various cultural events and discussions. Here are brief about some forms of Folk songs of Telangana

The Folk songs of Telangana had left a profound impact on the statehood movement as it played a significant role in the success of the ‘Dhoom-Dham’, a cultural event that was a vital part of the agitations.The two aspects of Telangana culture had played a catalyst in spreading the movement to every nook and corner of the region as their efficacy in mobilising people for the Telangana armed struggle launched to liberate the region from the clutches of tyrannical Nizam rulers is a proven fact. The impact of the Folk songs of Telangana on the armed struggle and later on the phased movements for statehood was so deep that people of the region still recollect many songs, particularly the popular ones such as “Bandenaka bandi gatti” sung by balladeer Gaddar for Telugu film “Maa Bhoomi”.

Dhoom-Dham coupled with Folk songs of Telangana had brought together people cutting across caste and creed working as a binding factor during the movement. It was the cultural revolution that brought the people of different ideologies, which played a significant role in the movement. From the first ‘Dhoom-Dham’ organised at Kamareddy in 2002, it had become an integral part of the movement. Right from Suddala Hanumanthu, Allam Veeranna, Sahu alias Shanigaram Venkateshwarlu, Nalla Adi Reddy and Gaddar to the present generation singers including Vimalakka, Rasamayi Balkishen and Deshapathi Srinivas, there were thousands of them who engaged the audience with their inspiring voices throughout the movement. The role of singers was unique for the fact that most of them had penned their songs themselves.  From repression during the days of armed struggle, the song had catapulted the movement from the handful of activists to masses. The ‘Dhoom-Dham’ has become so popular that all political parties now invite folk singers to perform during rallies and electioneering.

Recently Chief Minister K Chandrashekar Rao released a CD in Pragati Bhavan on Sunday containing songs on Bathukamma, prepared by Telangana Jagruthi. The Chief Minister formally released 40 songs rendered by 14 folk singers this year.  It may be mentioned here that every year Telangana Jagruthi releases Bathukamma songs that are popular among people and so far, it has released eight CDs in total.

Bathukamma is a colourful and vibrant festival of Telangana and celebrated by women, with flowers that grow exclusively in each region. This festival is a symbol of Telangana’s cultural identity. Bathukamma is celebrated by the women folk of Telangana, heralding the beauty of nature in vibrant colors of multitudinous flowers. The festival begins a week before the grand ‘Saddula Batukamma’ (the grand finale of the Batukamma festival) which falls two days before Dussehra. The women folk normally get back to their parent’s home from their in-laws and breathe the fresh air of freedom to celebrate the colors of flowers. For one complete week, they make small ‘Batukammas’, play around them every evening and immerse them in a nearby water pond. On the last day, the men folk of the house go into the wild plains and gather the flowers like gunuka and tangedi. They bring home bagfuls of these flowers and the entire household sits down to make the big ‘Batukamma’. The flowers are carefully arranged row after row in a brass plate (called taambalam) in circular rows and in alternate colors. As evening approaches the women folk dress colourfully with the best of their attire and adorn lot of ornaments and place the Batukamma in their courtyard. The women of neighborhood also gather in a large circle around it. They start singing songs by circling it repeatedly, building a beautiful human circle of unity, love, sisterhood. After playing in circles around the “Batukammalu”, before the onset of dusk, the women folk carry them on their heads and move as a procession towards a bigger water body near the village or town. The procession is extremely colourful with the decorations of women and the “Batukammalu”. Songs of folklore are sung in chorus throughout the procession and the streets resonate with them. Finally, when they reach the water pond the “Batukammalu” are slowly immersed into water after some more playing and singing. Then they share the ‘maleeda’ (a dessert made with sugar or raw sugar and corn bread) sweets amongst the family members and neighborhood folks. They return to their homes with empty ‘taambaalam’ singing songs in praise of Batukamma. The songs of Batukamma echo in the streets until late night during the entire week. Batukamma celebrates the inherent relationship between earth, water and the human beings. During the entire preceding week, women make ‘boddemma’ (a deity of Gowri – mother Durga – made with earthly mud) along with Batukamma and immerse it in the pond. This helps reinforce the ponds and helps it retain more water. Some Bathhukamma songs are:-

A few communities (such as Yadav and Kuruma Golla communities) in Telangana sing songs just like ballads. These may be in praise of Lord Shiva (also known as Mallikarjuna) or their own tribal Gods whom they worship. Oggukatha is a narration and dramatization of various stories of Gods such as Mallana, Beerappa and Yellamma. Traditional priests among Yadavs who perform marriage of Mallanna with Bhramaramba are known as ‘Oggus’. Oggukatha comprises of a narrator and his chorus who aid in dramatization of lyrics. Oggukatha folk singer groups visit Komrelly Mallanna temple every year.

The story is narrated in the form of a song/ballad. The stringed instrument folk veena (also called sarada) is used in Sarada Kala.

These are actually labour songs sung by various categories of workers – those working in the agricultural field, cart-pullers, industrial workers, stone crushers, construction workers etc. Work becomes a pleasure by singing folk songs and relaxes the tired mind and body. In the fields, men and women are divided into two groups. They sing these melodious folk songs in a group. Here is an example of a folk song sung by labourers working in the agricultural field and invoking the rain God —

There are some songs which denounce wrong social customs prevalent in the society. One such song composed by Annamayya is ‘Tandanana ahi tandanana’ where he has condemned social evils like caste and discrimination on the basis of colour. The lyrics are so simple that they can be easily understood even by illiterate people and serve to enlighten and educate the masses.

Tribes residing in Telangana have their own different festivals and tribal songs. These Folk songs of Telangana help them all to bond together during happiness (marriage and festivals) or in sorrow (death of any member). These singing sessions are a way of entertainment and relaxation too.

The introductory part of a folk song is known as ‘pallavi’ and ‘charanams’ are the continuation of the song content. Charanams may be contrasting in nature. For instance, while singing, men and women form into two separate groups singing in the form of question and answers. One group sends the question while the other group sings to answer the question!