Soil is an important matter for cultivation of crops. Soil supplies all the important factors for the growth of the crop plants. The yielding potential is largely dependent on the soil in which the crops are grown. The type and properties of soil directly affect the crop growth and yield, hence management and conservation of soil should be done with interest. Climate also is a factor that affects the crop growth and productivity. As we all know Indian agriculture is largely dependent on climatic conditions. The changing weather scenario affect the yield and quality of crop plants and one should find the ways to tackle the problem of such weather effects

Soil types are classified according to many more factors. They are classified on the basis of colour, depth, pH, productivity, texture and process of formation. 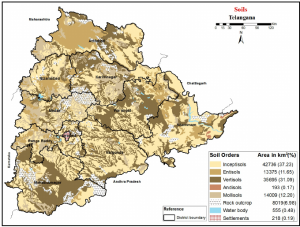 Soil types according to depth are as follows:

3) Deep soil – Soil depth is more than 45cm. Crops with long and deep roots are grown in this type a soil e.g. Mango, coconut.

Major types of soils in India

The main types of soil in India are as follows:

These soils are red to reddish yellow in colour and low in N, P, K, lime and magnesia. These soils are formed in-situ under conditions of high rainfall with alternation dry and wet periods. On account of heavy rainfall there is an excessive leaching of soil colloids and silica hence the soils are porous.

These are mostly clay soils and form deep cracks during dry season. An accumulation of lime is generally noticed of varying depths. They are popularly known as “Black cotton soils” because of their dark brown colour and suitability for growing cotton. These are also known as Indian regurs.These soils are deficient in nitrogen, phosphoric acid and organic matter but rich in calcium, potash and magnesium.

These soils occur along rivers and represent the soil materials that have been deposited by the rivers duing flood. Usually they are very productive soils but many are deficient in nitrogen, humus and phosphorus.

These soils occur at high elevations as well as at low elevations, where the rainfall is sufficient to support trees. These soils are very shallow, steep, stony, and infertile for the production of field crops. However, they serve a very useful purpose by supplying forest product such as timber and fuel.

These are mostly sandy soils that occur in the low rainfall track. They are well supplied with soluble salts but are low in nitrogen and organic matter and have a high pH value. These are quite productive. These are often subjected to wind erosion.

These soils occur in areas having a little more rainfall than the areas of desert soils. They show white incrustation of salts of calcium &Magnesium and sodium on the surface. These are poor in drainage and are infertile.

These types of soils are found in Kerala, coastal track of Orissa, Sunderban area of W.B. When the vegetation growing in such wet places dies, it decomposes very slowly dues to excessive wetness of soils and after several hundreds of year a layer of partly decayed organic matter accumulates on the surface, giving rise to such peaty and marshy soils. These are black coloured, heavy and highly acidic soils. When properly drained and fertilized, these soils produce good crops of rice.

Telanagana is a newly formed state which is bifurcated from Andhra pradesh on June 2, 2013. Its area of 114,840 km2 makes it the 12th largest state in the country. The state consist of various types of soil.

Most of the part in Telangana state is covered by Red soils which is about 48%.

These soils formed due to weathering of ancient metamorphic rocks.

Red color is due to presence of iron oxides.

These soils accounts for 25% of total area of Telanagan. These are made up of volcanic rocks and lava flow. These are also called as regur soils.

These soils are very much suitable for Cotton crop.

The black color is due to fe, mg oxides. Water holding capacity of these soils is high.

You can found most of the parts in Adilabad, Rangareddy, Nizama bad districts and less parts of KNR, WGL, MBN districts.

Covers 7% of the area. These soils formed due to intense leaching where high temperature and high rainfall occurs. These soils are sticky in nature.

Found in Medak and Khammam districts.

These soils are formed by the deposition of sediments by rivers. These are rich in humas and very fertile. You can see soils present at river banks.