Relief and Structure of Telangana

Telangana, also spelled Telengana or Telingana, constituent state of south-central India. It is bordered by the states of Maharashtra to the north, Chhattisgarh and Odisha to the northeast, Andhra Pradesh to the southeast and south, and Karnataka to the west. The area of what is now Telangana constituted the north-central and northeastern portions of Andhra Pradesh for almost six decades, but on June 2, 2014, that territory was calved off to form a separate state. The capital of both Telangana and Andhra Pradesh is Hyderabad, in west-central Telangana. 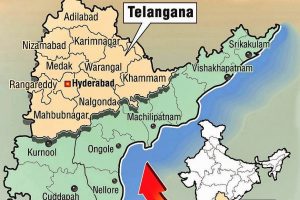 Telangana is situated on the Deccan Platue in the Indian Peninsula. The region is drained by two major rivers Godavari and River Krishna, but most of the land is arid. Telangana is also drained by several minor rivers such as the bhima, the maner, the manjira and the musi.

Telangana has an area of 1,14,800 square kilometres and it is drained by two major rivers, Krishna and Godavari. The river Godavari flows on the north, whereas Krishna flows in the south. Apart from these rivers, there are other small rivers such as Bhima, Dindi, Manjeera, Manair, Kinnerasani, Moosietc, which also flow through Telangana. 45% of the forest area of Andhra Pradesh is in the state of Telangana. It also has a vast coal deposit and around 20% of India’s coal deposit lies in Telangana. The coal produced from this region is supplied to the states in south India.

Relief and Structure of Telangana:

There are many small local reliefs in Telangana of height about 300 m, small summit areas and having steep slopes.  There are not any notable valleys in the region.  The altitudes of lands (hill tops) in the state range from 500 m to 800 m.

It is situated on the Deccan plateau, Telangana state occupies 1.14 lakh sq km on the central stretch of the eastern seaboard of the Indian peninsula.

Despite the region drained by two major rivers – 69% of Krishna’s catchment areas and 79% of Godavari – most of the land is dry and arid. There are also minor rivers like Bhima, Manjira and Musi that crisscross the state comprising 10 districts in all.

The annual rainfall ranges from 900 to 1,500 mm in northern Telangana and 700 to 900 mm in southern Telangana, mostly getting the precipitation from the southwest monsoon.

It is noteworthy that 45% of forest cover of undivided Andhra is now located in the five districts of Telangana.

The plateau’s average elevation is about 1,600 feet with its peaks in the west

and southwest and gradually sloping down towards the east and northeast, where it meets the disjointed ridges of the Eastern Ghats ranges.

The summer begins from March to end in June, followed by a period of tropical rains from July to September; and finally, winter occurs from October to February.

The annual precipitation mostly from the rainy southwest monsoon winds varies across the state. It averages about 35 inches (900 mm) per year, although the annual total often varies considerably from the average and can be as little as 20 inches (500 mm) in drier areas.