Telangana has an area of 1,14,800 square kilometres and it is drained by two major rivers, Krishna and Godavari. The river Godavari flows on the north, whereas Krishna flows in the south. Apart from these rivers, there are other small rivers such as Bhima, Dindi, Manjeera, Manair, Kinnerasani, Moosi etc, which also flow through Telangana. 45% of the forest area of Andhra Pradesh is in the state of Telangana. It also has a vast coal deposit and around 20% of India’s coal deposit lies in Telangana. The coal produced from this region is supplied to the states in south India. 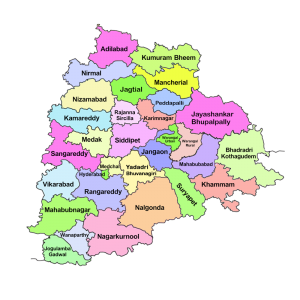 The Government of India, in exercise of powers conferred under the provisions ofthe Census Act, 1948, conducting the population census across the country once in adecade and releasing the results in different phases. Accordingly, the Government of India has conducted the population census in the year 2011 and released the final results, up to the village level, in different classifications. An attempt is made in this chapter to present the results of the population census, 2011 conducted in TelanganaState, excluding (327) revenue villages that were transferred to the state of AndhraPradesh as per the Andhra Pradesh Reorganization (Amendment) Act, 2014 (No. 19of 2014) along with certain comparisons with that of the earlier censuses. Accordingly, thegeographical area of the Telangana State is 1,12,077 Sq. Kms. And population is350.04 lakhs consisting of 176.12 Lakh males and 173.92 Lakh females, is thetwelfth largest state in terms of both area and size of population in union of India. Thesex ratio is being 988 in the state.

The people of the state are predominantly residing in rural areas with 61.12% and the restof 38.88% are residing in urban areas. The overall growth of total population duringthe decade 2001 to 2011 is 13.58%, whereas it was 18.77% in the preceding decade.The growth of the population in urban areas has been witnessing a significant increase.Urban population in the State grew by 38.12% during the decade 2001 to 2011 ascompared with 25.13% in the preceding decade. In sharp contrast, rural population in thestate grew by a modest 2.13% as per the 2011 census, which is much higher than theUnited Nations estimates of world population growth at 1.23%. Around 30% of totalurban population is residing in the capital city of Hyderabad alone.

The sex ratio is defined as the number of females per 1,000 males. This ratio for thestate is 988 according to 2011 Census. One distinguishing feature is that the sex ratio in thedistricts of Nizamabad, Adilabad, Karimnagar and Khammam is over 1,000. The sex ratiohas been witnessing an improvement in the State from 967 in 1991 to 971 in 2001 andfurther to 988 in 2011. Despite a favorable sex ratio of the total population, the sex ratioof children in the age group of 0-6 years is declined from 957 in 2001 to 932 in2011. The sex ratio of the SC population at 1,008 in 2011 is much higher than theState average of 988 in all districts, except Rangareddy, Hyderabad andMahabubnagar districts. The sex ratio of ST population at 977 is marginally lower than theState average of 988, but it is higher in Adilabad, Karimnagar, Nizamabad and Khammamdistricts.

According to the Census of India, the literacy rate is defined as the totalpercentage of the population of an area at a particular time, aged seven years or above whocan read and write with understanding.The literacy rate of the State as per 2011 census is 66.54%. Male literacy andfemale literacy are 75.04% and 57.99%, respectively. Hyderabad district is highest with 83.25%and Mahabubnagar district at lowest with 55.04%, the same is depicted in the followinggraph