In 2014 Telangana became the 29th state of India. There was a lot of turmoil in the state of Andhra Pradesh for a very long time, and it was led by K ChandrashekharRao, who wanted a separate statehood for Telangana since 2001. It took nearly 50 years for Telangana to get freedom and the struggle was referred to as the Telangana Movement. This marked both as a beginning as well an end. It is the end of a prolonged struggle which lasted over six decades and it was also the beginning of a process of creating a new identity for them.

Telangana has an area of 1,14,800 square kilometres and it is drained by two major rivers, Krishna and Godavari. The river Godavari flows on the north, whereas Krishna flows in the south. Apart from these rivers, there are other small rivers such as Bhima, Dindi, Manjeera, Manair, Kinnerasani, Moosietc, which also flow through Telangana. 45% of the forest area of Andhra Pradesh is in the state of Telangana. It also has a vast coal deposit and around 20% of India’s coal deposit lies in Telangana. The coal produced from this region is supplied to the states in south India. 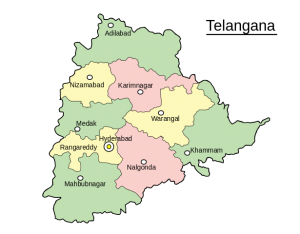 Climate of Telangana and Temperature

(October–November) monsoons; however, there is  large  variation  in  thedistribution  of  rainfall.  Telanganagenerally receives  modest  rainfall. The average  annual  rainfall  in  the  state  is  about  906  mm,  80  percent  of  which  is received from the South-West monsoon (June-September).

Due to low pressure system which developed in West Central Bayof Bengal and adjoining  areas  there  were  torrential  and  incessant  rains  in  the  districts  of Mahabubnagar and Nalgonda in the year 2009,2012 and 2013.

Floods by nature depend on several factors; one being incessant rains;rains in a short  period  of  time  crippling  natural  drainage.  However,  other  factors  such  as nature  of  the  collecting  basin,  nature  of  the  streams,  type  of  soil,  natural  and man-madevegetation,  amount  of  rainfall,  obstruction  to  natural  drainage etc. determine the type and extent of floods.Khammam district in Telangana region is most prone to monsoon floods.

The Central Water Commission defines drought as a situation occurring when the annual rainfall is less than 75% of the normal (defined over 30 years average). Drought is a normal, recurrent feature of Climate of Telangana. It occurs in virtually all climatic zones, but its characteristics vary significantly from one region to another. The table 7 &8 shows district wise total no. of mandals affected from droughts in year 1995-

96 to 2011-12. It shows that Telanganahas historically been prone to  drought  conditions  especially  in  Rangareddy,  Mahabubnagar  and  Nalgonda districts. Climate is projected to increase drought occurrence in the districts like Nalgonda  and  Mahabubnagarwhich  would  impact  not  only  water  resources  but also  have  a  cascading  effect  on  other dependent  sectors.  Increased  drought conditions  can  also  severely  affect  agricultural  andpastoral  livelihoods  and increase  vulnerability  and  risks  for  farmers,  and  peopledepending  on  such livelihoods.  For farmers who are  strongly  dependent  on  rainfall  foragricultural activities, crop failure caused by drought can lead to household food insecurity. For pastoralists and agro – pastoralists whose livelihoods and food security depend on livestock,  drought  conditions  can  cause  malnutrition  or  disease  in  livestock  because of insufficient fodder.

Heat Waves of Climate of Telangana

A  heat  wave  is  a  climatologically  extreme  event  involving  abnormally higher temperature relative to normal15during the Summer i.e. the months of AprilJune.During  this  period  the  temperatures  rise  considerably,  sometimes touching   47ºC   in   Maymonthin   districts   like   Khammam,   Nizamabad, Nalgonda,  Karimnagar  and  Warangal. During  the  year  1986-1993,  the  heat waves  were  mainly  of  moderate  nature  with  maximum  duration  of  seven days.  The  highest  maximum  temperature  of  47C was  recorded  at  Nalgondaand  Ramagundam  on  11thMay,1998.From  1994  onwards,  the  frequency  of severe  heat  waves  and  the  duration  of  heat  wave  spells  have  increased significantly.  In  1997  (18th

due  to  sunstroke had  beenreported in the year 2015(as on30thMay, 2015). The maximum deaths were recorded  inNalgonda,  Khammam,  Karimnagar  and  Mahabubnagar districts, where  the  temperatures  have  crossed  45°  C.

EFFECTS OF CLIMATE CHANGE ON Climate of Telangana