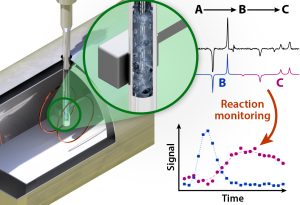 MRI is a medical imaging application of nuclear magnetic resonance (NMR). MRI is used in radiology to form pictures of the anatomy and the physiological processes of the body.

MRI scanners use strong magnetic fields and radio waves to generate images of the organs in the body. MRI does not involve X-rays or the use of ionizing radiation, which distinguishes it from CT.

Hence MRI is seen as a better choice than a CT scan. Compared with CT scans, MRI scans typically take longer and are louder. In addition, people with metal medical implants may be unable to undergo an MRI examination safely. This is because of the strong magnetic fields employed by the MRI Scanner.

Chemists rely on NMR Spectroscopy as a tool to chart the complex molecular structures of matter. The technique sees samples placed in a specialised NMR spectrometer, where it’s exposed to a strong magnetic field. The gravitational pull generated by the field excites the nuclei of some atoms and creates resonant frequencies. These resonant frequencies are then tracked, measured and used to generate useful data.

Most people are familiar with Magnetic Resonance Imaging (MRI) scans which use powerful magnetic fields and radio waves to reveal detailed images of the internal organs. Data is generated based on rates of absorption and energy emission recorded in the radiofrequency (RF) range. The medical imaging technique is founded in NMR Spectroscopy and uses the same basic principles.

When used alongside metabolomics data, NMR Spectroscopy is an invaluable tool for identifying human disorders. The cellular metabolism contains important biomarkers used to diagnose a wide range of conditions, including tuberculosis, pneumonia and malaria. NMR Spectroscopy allows researchers to identify these tell-tale biomarkers and treat patients accordingly. The technique can also be used to investigate Parkinson’s disease, as well as cardiovascular diseases and a range of neuropsychiatric disorders such as bipolar, schizophrenia, major depression and autism-spectrum disorders.

t’s not just the medical field where NMR Spectroscopy is considered a valuable tool, with the technique also used for environmental monitoring. Spectrometers are used to detect and characterise contaminants in air, soil and water samples as well as monitor the metabolic responses of organisms exposed to these contaminants.