History and Battles of Rajasthan

The ancient civilised history of Rajasthan goes back to 5,000 years ago when in the present day districts of Jhunjhunu and Sikar, along with other areas of jaipur district bordering south Haryana, which formed the part of Vedic state of Brahmavarta along with districts of Mahendragarh and Rewari in Haryana, that Vedic seers started composing Vedic scriptures, which form part of Sanatan Dharma, the base of present day Hinduism. Revered Saraswati and Drishadwati rivers formed the then Brahmavarta state. Drishadwati river is identified as the Vedic Drishadwati by Bhargava. Parts of Rajasthan may have been occupied by the Indus Valley Civilization (Harappans). Excavations at Kalibanga in northern Rajasthan around 1998 revealed the existence of human settlements of Harappan times on the banks of a river that dried up later, which some people believe to be the Saraswati, archaeologists hope the Saraswati will unlock mysteries of the past. Rajasthan’s geographic position in India has caused it to be affected by the expansionist efforts of various empires. It was a part of the Maurya Empire around 321-184 BCE.

The north-western region of India, which incorporates Rajasthan, remained in early history for the most part independent from the great empires consolidating their hold onthe subcontinent. Buddhism failed to make substantial inroads here; the Mauryan Empire (321-184 BC), whose most renowned emperor Ashoka converted to Buddhism in262 BC, had minimal impact in Rajasthan. However, there are Buddhist caves and stupas (Buddhist shrines) at Jhalawar, in southern Rajasthan. Ancient Hindu scriptural epics make reference to sites in present day Rajasthan. The holy pilgrimage site of Pushkar is mentioned in both the Mahabharata and Ramayma.

The Ahar culture, also known as the Banas culture is a Chalcolithic archaeological culture on the banks of Ahar River of southeastern Rajasthan state in India, lasting from c. 3000 to 1500 BCE, contemporary and adjacent to the Indus Valley Civilization. Situated along the Banas and Berach Rivers, as well as the Ahar River, the Ahar-Banas people were exploiting the copper ores of the Aravalli Range to make axes and other artefacts. They were sustained on a number of crops, including wheat and barley.

Prithviraj Chauhan defeated the invading Muhammad Ghori in the First Battle of Tarain in 1191 and in fifteen further battles before himself being defeated when he was betrayed by one of his own.

After the defeat of Chauhan around 1200, a part of Rajasthan came under Muslim rulers. The principal centers of their powers were Nagaur and Ajmer. Ranthambhor was also under their suzerainty. At the beginning of the 13th century, the most prominent and powerful state of Rajasthan was Mewar. The Rajputs resisted the Muslim incursions into India, although a number of Rajput kingdoms eventually became subservient to the Delhi Sultanate. Mewar led others in resistance to Muslim rule: Rana Sanga united the various Rajput clans and fought against the foreign powers in India. Rana Sanga defeated the Afghan Lodi Empire of Delhi and crushed the Turkic Sultanates of Malwa and Gujarat. Rana Sanga was later defeated at Khanwa aginst the Mughal Empire because of treachery from the Tomar king Silhadi.

Akbar arranged matrimonial alliances to gain the trust of Rajput rulers. He himself married the Rajput princess Jodha Bai, the daughter of the Maharaja of Amer. He also granted high offices to a large number of Rajput princes and this maintained very cordial relations with them. Before long, these actions caused many previously hostile Rajputs to be his friends, and many of them surrendered their kingdoms to him. Rulers like Raja Maan Singh of Amer were trusted allies. However, some Rajput rulers were not ready to accept Akbar’s dominance and preferred to remain independent. One such ruler was Raja Uday Singh of Mewar, who founded the city of Udaipur. He never accepted Akbar’s supremacy and was at constant war with him. Akbar forcefully seized Chittor, his capital. After his death, this struggle was continued by his son – Rana Pratap. He fought a terrible battle with Akbar at the Haldighat pass where he was defeated and wounded. Since then Rana Pratap remained in recluse for 12 years and attacked the Mughal ruler from time to time. He fought valiantly throughout his life never ceded his independence to the Mughal ruler.

Since the early 1700s, the Maratha Empire began expanding northwards, led by Peshwa Baji Rao I of Pune. This expansion finally brought the newly founded Hindu Maratha Empire in contact with the Rajputs. Rajasthan saw many invasions by the Marathas, under military leadership 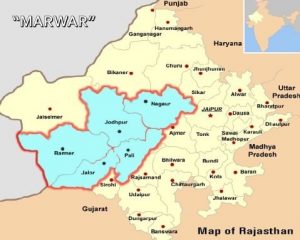 of Holkars and Scindhias. Most of Rajputana passed under the control of the Maratha Empire and continued to pay tribute to Pune till the British East India Company replaced the Marathas as paramount rulers.

The arrival of the British East India Company in the region led to the administrative designation of some geographically, culturally, economically and historically diverse areas, which had never shared a common political identity, under the name of the Rajputana Agency. This was a significant identifier, being modified later to Rajputana Province and lasting until the renaming to Rajasthan in 1949. The Company officially recognised various entities, although sources disagree concerning the details, and also included Ajmer-Merwara, which was the only area under direct British control. Of these various areas, Marwar and Jaipur were the most significant in the early 19th-century, although it was Mewar that gained particular attention from James Tod, a Company employee who was enamoured of Rajputana and wrote extensively, if often uncritically, of the people, history and geography of the Agency as a whole. Alliances were formed between the Company and these various princely and chiefly entities in the early 19th century, accepting British sovereignty in return for local autonomy and protection from the Marathas. Following the Mughal tradition and more importantly due to its strategic location Ajmer became a province of British India, while the autonomous Rajput states, the Muslim state Tonk (princely state), and the Jat states Bharatpur, [Dholpur] were organized into the Rajputana Agency. In 1817-18, the British Government concluded treaties of alliance with almost all the states of Rajputana. Thus began the British rule over Rajasthan, then called Rajputana.

Against the Sultanate’s of Dehli, Gujarat and Malwa

Against the Mughal Empire