Divisions and Districts of Rajasthan

The detail analysis of Population Census 2011 published by Govt. of India for Rajasthan state reveal that population of Rajasthan has increased by 21.31% in this decade compared (2001-2011) to past decade (1991-2001). The density of Rajasthan state in the current decade is 519 per sq mile. 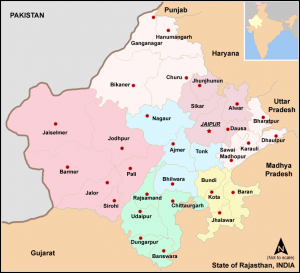 The 33 districts are grouped into seven divisions:

Districts of Rajasthan with Their HQ