The study of National Income is important because of the following reasons:

In India the Central Statistical Organization has been formulating national income.

However some economists have felt that GNP has a measure of national income has limitation, since they exclude poverty, literacy, public health, gender equity and other measures of human prosperity.

Instead they formulated other measures of welfare like Human Development Index (HDI).

The National income measures the flow of goods and services in an economy.

Note: The National income measured only on flow and not on stock.

The National income measures of net volume of goods and services produced in a country during a year. It also includes net earned foreign income. The National Income is counted without duplication.

The National income measures the productive power of an economy (flow).

The National wealth measures the stock of commodities held by the nationals of a country at a given point of time.

The National income estimates are in relation with the financial year.

In India the financial year begins on April 1 and ends on March 31. 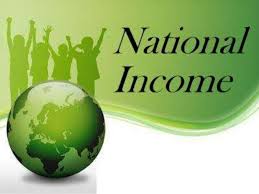 No specific attempts were made.The 1st attempt was made by Dada Bhai Naoroji (Grand Old Man of India) in the   year 1868 in his book ‘Poverty and Un British Rule in India’.He estimated that the per capita annual income as Rs. 20 per annum.

The above people estimated the national income with the value of the output of the agriculture sector and then added a certain percentage as the income of the non-agriculture sector.The estimates suffered with serious limitations.

This report is considered to be a landmark in the history of India as this is the first time that it provided a comprehensive data of National Income for the whole India.

CONCEPT (THEORY) OF THE NATIONAL INCOME:

Now let us try to understand the meaning of each:

The Gross Domestic Product is the money value of all the goods and services produced within the geographical boundaries of a country in a given period of time.

Note: the GDP is only within the country.

Note: The GNP is calculated on the basis of market prices of produced goods, it also includes indirect taxes and subsidies if any.

This is GNP minus depreciation.

Note: Depreciation is the consumption of capital stock

Note: Both indirect taxes and subsidies are deducted from the NNP.

This is actual income obtained by the people after deducting various taxes.

This is the Personal income minus direct taxes.

HOW THE NATIONAL INCOME IS MEASURED?

There a 3 methods to calculate the National income.These methods are given by Simon Kuznets.

In India the combination of Product method and Income methods is used for calculating the National Income.

In the Product method the GDP is taken into consideration.Net income earned in foreign countries is deducted from the GDP.From this the depreciation is subtracted.

In this method the National Income is calculated by

The total net income of the people working in different sectors and commercial sectors are taken into consideration.

This method is not generally used for calculating the National income.According to this method

The first problem in National Income accounting relates to the treatment of non-monetary transactions such as the services of housewives to the members of the families. For example, if a man employees a maid servant for household work, payment to her will appear as a positive item in the national income. But, if the man were to marry to the maid servant, she would performing the same job as before but without any extra payments. In this case, the national income will decrease as her services performed remains the same as before.

There are large numbers of petty producers and it is difficult to include their production in national income because they do not maintain any account.

Another problem is whether the public services like general administration, police, army services, should be included in national income or not. It is very difficult to evaluate such services.

Individual get pension, unemployment allowance and interest on public loans, but these payments creates difficulty in the measurement of national income. These earnings are a part of individual income and they are also a part of government expenditures.

When the market prices of capital assets change the owners make capital gains or loss such gains or losses are not included in national income.

Wages and Salaries paid in Kind

Additional payments made in kind may not be included in national income. But, the facilities given in kind are calculated as the supplements of wages and salaries on the income side.

The main problem is whether to include the income generated within the country or even generated abroad in national income and which method should be used in the measurement of national income.

Besides these, the following points are also represents the difficulties in national income accounting: