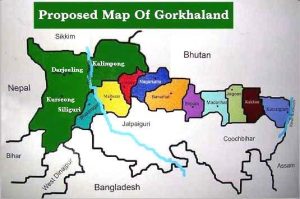 But, the term “Gorkhaland” was coined recently, in the 1980s, by Subhash Ghising, the founder of Gorkha National Liberation Front (GNLF). The Gorkhaland Movement is a movement mainly focused in the Darjeeling Hills of West Bengal, which demands the creation of a separate state of Gorkhaland.

The main reason for the separate Gorkhaland movement is due to the differences in ethnicity, culture and language. The people of Nepali-Indian Gorkha ethnic origin on the Northern part of West Bengal demands a state on basis of their cultural identity, which is very different from Bengali culture. In addition to an identity crisis, there is also an issue of poverty, under-development and politicisation of the issue.

According to Rajat Ganguli (author of ‘Poverty, Malgovernance and Ethnopolitical Mobilization: Gorkha Nationalism and the Gorkhaland Agitation in India’). It was a failure of governance combined with politicisation that bred the Gorkhaland issue. He cites the historical trend, especially post-independence, where the issue erupts only when it’s pampered by political aspirations.

The demands for separate statehood in India have been there even before India’s Independence. Even after the state re-organization of 1956, there were demands from various corners of the country for the creation of a separate state. Linguistic, cultural, ethnic and economic distinctions can be traced as the core reasons behind these demands.