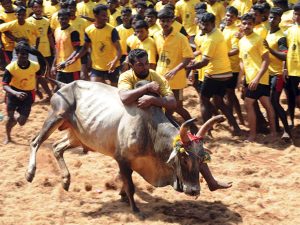 Jallikattu is a bull taming event practiced in Tamil Nadu as a part of Pongal celebrations. Jallikattu is recently in news because of the Supreme Court rulings, Government interventions and agitations from the public against the Jallikattu ban.

Jalikattu is believed to have been practiced since at least 2500 years. A seal from Indus Valley civilization depicting the practice is preserved in the National Museum, New Delhi. A cave painting that depicts a man trying to tame a bull is estimated to be 2500 years old by the Archaeologists. There are references to people enjoying witnessing and participating in Jalikattu in Silappatikaram one of the 5 great epics of Tamil classical period and 2 other ancient literary works like Kalithogai and Malaipadukadaam.

In 1991, the Environment Ministry had banned the training and exhibition of bears, monkeys, tigers, panthers and dogs. This was challenged by the Indian Circus organisation in the Delhi High Court but the court upheld the notification. The ban on Jallikattu itself has existed on and off since 2006.

In 2006, the Madras High Court banned it after the death of a young spectator. In 2009, the ban was subsequently lifted with the Tamil Nadu Regulation of Jallikattu Act, 2009. In 2011, the Environment Ministry at the Center issued a notification especially mentioning ‘bulls’.

In 2014, the Supreme Court banned Jallikattu and struck down the 2009 act. In January 2016, Supreme Court stayed this 2016 Union Government notification, as it was challenged by the AWBI and PETA. The case is still being heard and so far the Court has not delivered its final verdict.

The National Green Tribunal placed an interim ban on glass-coated kite flying strings after a petition by PETA because it causes the death of many birds. The ban came just before Makar Sankranti. In December 2016, the Hyderabad High Court upheld the ban on cockfighting in Andhra Pradesh and Telangana, after a petition was filed by the AWBI, HSI India (Humane Society International), PFA, and other organisations.

In 2016, an amendment to the Schedule Y of the Drugs and Cosmetic Rules, 1945, was passed by the Ministry of Health and Family Welfare, following appeals by PETA India, HSI India (Humane Society International), and the Union Minister Maneka Gandhi. The amendment prevents testing on animals for new drug including two cruel and obsolete drug tests on rabbits, including the Draize irritation test.