These awards are given for commendable performance in sports. They are named after the name of a famous person and the good work done by him. They are given to the players for their good performance.

The Arjuna Awards are the National Awards of Sports , given by the Ministry of Youth Affairs and Sports, Government of India to recognize outstanding achievement in sports. Started in 1961, The Arjuna Awards carries a cash prize of ₹ 500,000, a bronze statue of Arjuna and a scroll. Over the years the scope of the award has been expanded and a large number of sports persons who belonged to the pre-Arjuna Award era were also included in the list. Further, the number of disciplines for which the award is given was increased to include indigenous games and the physically handicapped category.  The 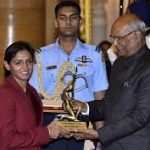 Government revises the criteria for the Arjuna Award over the years. As per the revised guidelines, to be eligible for the Award, a sportsperson should not only have had good performance consistently for the previous four years at the international level with excellence for the year for which the Award is recommended, but should also have shown qualities of leadership, sportsmanship and a sense of discipline.

The Dronacharya Award, officially known as Dronacharya Award for Outstanding Coaches in Sports and Games, is sports coaching honour of the Republic of India. The award is named after Drona, often referred as “Dronacharya” or “Guru Drona”, a character from the Sanskrit epic Mahabharata of ancient India. He was master of advanced military warfare and was appointed as the royal preceptor to the Kaurava and the Pandava princes for their training in military arts and astras (Divine weapons). It is awarded annually by the Ministry of Youth Affairs and Sports. Recipients are selected by a committee constituted by the Ministry and are honoured to have done “outstanding and meritorious work on a consistent basis and enabled sports persons to excel in international events” over a period of four years. Two awards are designated for the lifetime contribution in coaching where the achievements in producing “outstanding sportspersons” over a period of 20 years or more are considered. As of 2017, the award comprises a bronze statuette of Dronacharya, a certificate, ceremonial dress, and a cash prize of ₹5 lakh .

The Rajiv Gandhi Khel Ratna, officially known as Rajiv Gandhi Khel Ratna Award in Sports and Games, is the highest sporting honour of the Republic of India. The award is named after Rajiv Gandhi, former Prime Minister of India who served the office from 1984 to 1989. It is awarded annually by the Ministry of Youth Affairs and Sports. The recipient(s) is/are selected by a committee constituted by the Ministry and is honoured for their “spectacular and most outstanding performance in the field of sports over a period of four years” at international level. As of 2017, the award comprises a medallion, a certificate, and a cash prize of ₹7.5 lakh.

Instituted in 1991–92, the award was given for the performance by a sportsperson in a year. Based on the suggestions provided by 2014 award selection committee, the Ministry revised the criteria in February 2015 to consider the performance over a period of four years. The nominations for a given year are accepted till 30 April or last working day of April with not more than two sportspersons nominated for each sports discipline. A twelve-member committee evaluates the performances of a sportsperson at various International events like Olympic Games, Paralympic Games, Asian Games, and Commonwealth Games. The committee later submits their recommendations to the Union Minister of Youth Affairs and Sports for further approval.

The first recipient of the award was Chess Grandmaster Viswanathan Anand, who was honoured for the performance in the year 1991–92. In 2001, sport shooter Abhinav Bindra, then aged 18, became the youngest recipient of the award.Usually conferred upon only one sportsperson in a year, a few exceptions have been made (1993–94, 2002, 2009, 2012, and 2016–17) when multiple recipients were awarded in a year. As of 2017, there have been thirty-four recipients from fourteen sport disciplines: Athletics, Badminton, Billiards, Boxing, Chess, Cricket, Field hockey, Gymnastics, Shooting, Snooker, Tennis, Wrestling, Weightlifting, and Yacht racing. The most recent recipients of the award are Para Athlete Javelin thrower Devendra Jhajharia and Hockey player Sardara Singh.