Rocks are aggregates or physical mixture of one or more minerals. Minerals on the other hand are made up of two or more elements in a definite ratio. They have a definite chemical composition. Crust is made up of more than 2000 minerals, but out of these, 6 are the most abundant and contribute the maximum to this uppermost part of the earth. These are feldspar, quartz, pyroxenes, amphiboles, mica and olivine.
Rocks are of immense economic importance to us.
Rocks differ in their properties, size of particles and mode of formation. On the basis of mode of formation rocks may be grouped into three types:
(a) Igneous
(b) Sedimentary and
(c) Metamorphic

Magma is a mixture of liquid rock, crystals, and gas. Characterized by a wide range of chemical compositions, with high temperature, and properties of a liquid.
On the basis of their mode of occurrence, igneous rocks can be classified as : extrusive or volcanic rocks and intrusive rocks.
(i) Extrusive igneous rocks are formed by cooling of lava on the earth’s surface. As lava cools very rapidly on coming out of the hot interior of the earth, the mineral crystals forming these rocks are very fine. These rocks are also called volcanic rocks. Gabbro and basalt are very common examples of such rocks. These rocks are found in volcanic areas. Deccan plateau’s regur soil in India is derived from lava.

(ii) Intrusive igneous rocks are formed when magma solidifies below the earth’s surface. The rate of cooling below the earth’ s surface is very slow which gives rise to formation of large crystals in the rocks. Deep seated intrusive rocks are termed as plutonic rocks and shallow depth intrusive rocks are termed as hypabyssal. Granite and dolerite are common examples of intru- sive rocks. From this point of view, therefore, igneous rocks can, in accor- dance with their mode of formation, be classified as (a) Plutonic, (b) Hyp- abyssal and (c) Volcanic rockmasses. The huge blocks of coarse granitic rocks are found both in the Himalaya and the Decean Plateau.

Metamorphic rocks are formed under the influence of heat or pressure on sedimentary or igneous rocks. Tremendous pressure and high temperature change the colour, hard- ness, structure and composition of all types of pre-existing rocks. The process which bring about the change is known as Metamorphism and the ultimate products, formed due to operation of such processes are defined as the Metamrphic rocks.
Metamorphism refers to the changes in mineral assemblage and texture that result from subjecting a rock to pressures and temperatures different from those under which the rock originally formed.
The original rock that has undergone metamorphism is called the protolith. Protolith can be any type of rock .

Minerals are defined as solid, inorganic, naturally occurring substances with a definite chemical formula and general structure. Almost all chemical elements in the Earth’s crust are associated with at least one mineral. They vary in color, hardness, density, crystal form, crystal size, transparency, composition, location, and abundance. Some minerals are radioactive (uranophane), while others are magnetic (magnetite). Some are uncombined elements, such as gold, silver, sulfur, bismuth, copper and platinum. Certain minerals, such as fluorite (calcium fluoride), glow with a vibrant luminescence after exposure to ultraviolet light. Feldspar (a potassium aluminum silicate) and quartz (silicon dioxide) are the most abundant minerals found in the Earth’s crust. Mankind has coveted many minerals and gemstones due to their striking, beautiful colors. Some specimens of opal exhibit iridescent, rainbow-like colors within their crystals, while some specimens of the gemstone tourmaline show progressions of watermelon-like green to pink color from one side of a crystal to another. Although interesting, a few minerals are deceiving; many amateur prospectors have been tricked into thinking they have found gold, but have instead found pyrite (iron disulfide), otherwise known as “Fool’s Gold” due to its uncanny resemblance to the precious metal. Diamond, the hardest natural substance found on Earth, has long been prized as the most desirable of all minerals due to its stunning interaction with light. Most diamonds, though, are impure and not suitable as gemstones; instead, they find industrial use as cutting tools, and are even made synthetically to meet this demand.

What Makes a Mineral a Mineral?

In order for something to be a mineral, it must first meet four criteria:

The Physical properties of minerals are used by Mineralogists to help determine the identity of a specimen. Some of the tests can be performed easily in the field, while others require laboratory equipment. For the beginning student of geology, there are a number of simple tests that can be used with a good degree of accuracy. The list of tests is in a suggested order, progressing from simple experimentation and observation to more complicate either in procedure or concept.

The following physical properties of minerals can be easily used to identify a mineral:

Most minerals have a distinctive color that can be used for identification. In opaque minerals, the color tends to be more consistent, so learning the colors associated with these minerals can be very helpful in identification. Translucent to transparent minerals have a much more varied degree of color due to the presence of trace minerals. Therefore, color alone is not reliable as a single identifying characteristic.

The streak of metallic minerals tends to appear dark because the small particles of the streak absorb the light hitting them. Non-metallic particles tend to reflect most of the light so they appear lighter in color or almost white.

Hardness is one of the better properties of minerals to use for identifying a mineral. Hardness is a measure of the mineral’s resistance to scratching. The Mohs scale is a set of 10 minerals whose hardness is known. The softest mineral, talc, has a Mohs scale rating of one. Diamond is the hardest mineral and has a rating of ten. Softer minerals can be scratched by harder minerals because the forces that hold the crystals together are weaker and can be broken by the harder mineral.

The following is a listing of the minerals of the Mohs scale and their rating: 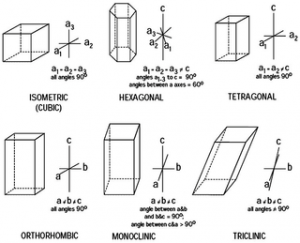 Tenacity is the characteristic that describes how the particles of a mineral hold together or resist separation. The chart below gives the list of terms used to describe tenacity and a description of each term.

Magnetism is the characteristic that allows a mineral to attract or repel other magnetic materials. It can be difficult to determine the differences between the various types of magnetism, but it is worth knowing that there are distinctions made.

Most minerals have no odor unless they are acted upon in one of the following ways: moistened, heated, breathed upon, or rubbed.

Only soluble minerals have a taste, but it is very important that minerals not be placed in the mouth or on the tongue. You should not test for this property in the classroom.

Detail account of Mineral resources of India is as follows:-