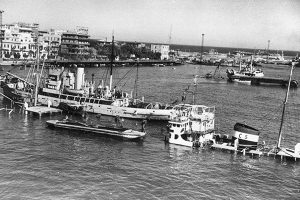 The Suez Crisis began on October 29, 1956, when Israeli armed forces pushed into Egypt toward the Suez Canal after Egyptian president Gamal Abdel Nasser (1918-70) nationalized the canal, a valuable waterway that controlled two-thirds of the oil used by Europe. The Israelis were soon joined by French and British forces. At the same time, the Soviets, eager to exploit Arab nationalism and gain a foothold in the Middle East, supplied arms from Czechoslovakia to the Egyptian government beginning in 1955 and eventually helped Egypt construct the Aswan Dam on the Nile River after the United States refused to support the project.

This nearly brought the Soviet Union into the conflict and damaged their relationships with the United States. In the end, Egypt emerged victoriously, and the British, French and Israeli governments withdrew their troops in late 1956 and early 1957. The event was a pivotal event among Cold War superpowers.

In the aftermath of the Suez Crisis, Britain and France, once the seat of empires, found their influence as world powers weakened as the United States and the Soviet Union took a more powerful role in world affairs. British Prime Minister Anthony Eden resigned two months after withdrawing British troops  The crisis made Nasser a powerful hero in the growing Arab and Egyptian nationalist movements.

Israel, while it did not gain the right to utilize the canal, was once again granted rights to ship goods along the Straits of Tiran.  Ten years later, Egypt shut down the canal following the Six-Day War (June 1967 to be discussed in the following section). For almost a decade, the Suez Canal became the front line between the Israeli and Egyptian armies.