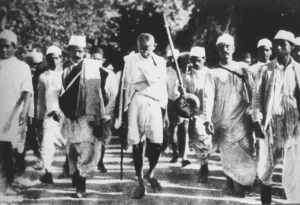 Mahatma Gandhi, after his struggle against apartheid in South Africa (racial discrimination against the blacks) for almost twenty years, returned to India in 1915.  On Gokhale’s advice, he spent a year travelling around British India to understand the problems of Indians.

He initially maintained a distance from political affairs, including the Home Rule Movement that was gathering momentum at this time.  Mahatma Gandhi began his experiments with Satyagraha against the oppressive European indigo planters at Champaran in Bihar in 1917.  Champaran issue had actually begun in the early 19th century when European planters made agreements with Indian farmers that forced them to cultivate indigo on 3/20th of their holdings (known as the Tinkathia system).

In 1908 Raj Kumar Shukla, a local man persuaded Gandhiji to come to Champaran to investigate the problem. Gandhi reached Champaran but faced resistance from the Commissioner who ordered him to immediately leave the district. Gandhiji refused. He preferred to take the punishment for his defiance of the law. This step was unusual because even Home Rule leaders used to obey the Government.  The British Indian government didn’t want to create a controversy and ordered the local Government to retreat. They allowed Gandhiji to proceed with his enquiry and even nominated him as one of the enquiry members of the Government.

Meanwhile, Gandhiji started investigating grievances of peasants along with Brij Kishore, Rajendra Prasad and other members of the Bihar intelligentsia. J.B. Kripalani toured the villages and recorded the statements of peasants.  Gandhiji had little difficulty in convincing the Commission that the Tinkathia system needed to be abolished and that the peasants should be compensated for the illegal enhancement of their dues. The Commission founder planters guilty of exploitation.