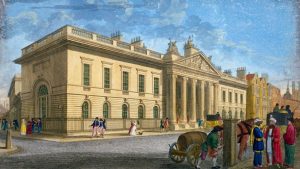 Robert Clive (1765-72) was given a second chance following his outstanding military leadership. He introduced a system known as ‘dual administration’ in Bengal. The company already had the power to collect its own taxes. Thus it was the diwan. Now, with the say in the appointment of the deputy subahdar, the company got the de-facto ownership of the nizamat too. Thus, in effect, the company had power without responsibility.

The next was Warren Hastings (1772-85), who had ‘war’ in his name itself. The interference in others’ territories continued. Initially, he fought Mysore with the help of the Nizam, and later intervened in the internal politics of the Marathas, by siding with Raghunath Rao, against the infant Peshwa Madhav Rao 2, who was represented by Nana Phadnis. This long Anglo-Maratha war lasted from 1775 to 1782. It was at this time that he had to face the combined forces of the Marathas, the Nizam, and Mysore. But through tactics and turning one ruler against another, he fought his way through. In the first Anglo-Maratha war, the British couldn’t do much. In the end, the treaty of Salbai was signed which maintained the status quo and gave them ample time to recover. This enabled them to fight with Hyder, in which they were helped by the Marathas.

Wellesley (1798-1805) was the next important Governor-General. By 1797, Mysore and Marathas were weakened in power. He knew it was the ripe time for rapid expansion. He followed the policy of ‘Subsidiary alliances’, outright wars, and assumption of territories of previously subordinated rulers. You know what the theory of a subsidiary alliance is. It was described as “a system of fattening allies as we fatten oxen, till they were worthy of being devoured”. The first was the Nizam in 1798 and 1800. Then came the Nawab of Awadh in 1801.