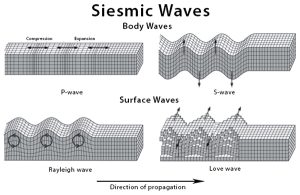 Seismometers are the instruments which are used to measure the motion of the ground, which including those of seismic waves generated by earthquakes, volcanic eruptions, and other seismic sources.

A Seismograph is also another term used to mean seismometer though it is more applicable to the older instruments. The recorded graphical output from a seismometer/seismograph is called as a seismogram.

There are two main scales used in the seismometers:

The scale represents the intensity of earthquake by analyzing the after effects like how many people felt it, how much destruction occurred etc. The range of intensity is from 1-12.