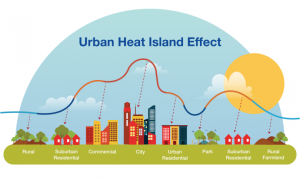 Urban Heat Islands (UHI) are significantly warmer urban areas than its surrounding rural areas due to human activities. Urban Heat Island is a major problem associated with rapid urbanisation. The temperature increase is attributed to deforestation and the construction materials adopted for city building. Usually, under the urban heat island phenomenon, the central regions of urban centres exhibit higher mean temperatures than the surrounding areas.

Causes for the formation of heat islands in the urban habitat of the world are as follows: