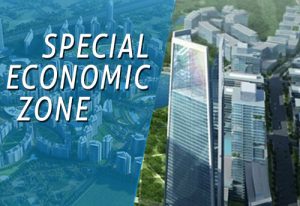 At a time when India is poised to breach the annual $400-billion target for exports, the move to change laws governing the Special Economic Zones Act comes as a big boost for the sector. This transformative announcement will enable states to become partners in the Development of Enterprise and Service Hubs.

An SEZ is a territory within a country that is typically duty-free (Fiscal Concession) and has different business and commercial laws chiefly to encourage investment and create employment. 2. SEZs are created also to better administer these areas, thereby increasing the ease of doing business. 3. Asia’s first EPZ (Export Processing Zones) was established in 1965 at Kandla, Gujarat.

India’s coastline of 7,517 km, abutting nine states, can be leveraged to develop large hubs or industrial clusters near deep draft ports to enable goods to be sent out. At the same time, firms may choose to be located in tier-2 and tier-3 cities in the hinterland, to be able to cash in on labour costs and the relatively lower cost of living. If the new legislation is framed with these considerations in mind, labour-intensive exports in apparel, footwear, furniture can be encouraged in a big way.

Promotion of MSME investments in SEZs by linking with MSME schemes and allowing alternate sectors to invest in sector-specific SEZs is among the recommendations by the Baba Kalyani Committee on SEZs. The prospective SEZ legislation is expected to be more enterprise-friendly. As it “provides for significantly larger zones with more flexible labour laws and speedy customs clearance of inbound inputs and outbound finished goods, we may witness in India the emergence of China-style large, globally competitive processing firms.” NITI Aayog has always been in favour of India taking a leaf out of the China book for the development of coastal economic zones on the lines of a Shenzhen.