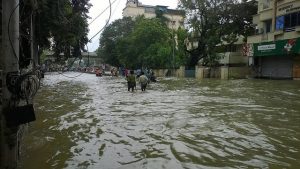 Chennai and several other parts of Tamil Nadu received heavy rainfall, leading to waterlogging and damage to homes.

The Madras High Court brought up the flooding in Chennai while hearing a public interest litigation on removing encroachments to ensure that roads in the city are wide enough.
Causes

India has a long coastline of 7,500 km and an estimated 14% of India’s total population lives alongside it that traverses nine states, 77 towns and cities including some of the fastest-growing such as Mumbai, Chennai, and Kochi making them more prone to flood due to adjacent sea and erratic monsoonal behaviour.. A 2016 UN report estimated that 40 million people in India will be at risk from sealevel rise by 2050.