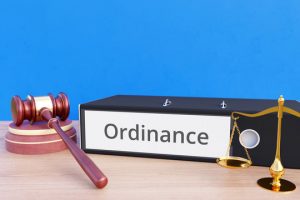 The ordinance was originally conceived as an emergency provision. However, in recent times the frequent use of ordinance route has led to the undermining the role of the legislature and the doctrine of Separation of powers.

Article 123 of the Constitution of India grants the President certain law-making powers to promulgate ordinances when either of the two Houses of Parliament is not in session. Hence, it is not possible for the ordinances to be issuedin the Parliament.

Supreme Court in RC Cooper vs. Union of India (1970) held that the President’s decision to promulgate ordinance could be challenged on the grounds that ‘immediate action’ was not required, and the ordinance had been issued primarily to bypass debate and discussion in the legislature.

The issue of frequent promulgation of ordinances was again brought up in the Supreme Court through a writ petition.

Associated Issues with the Ordinance Route

As lawmaking is a legislative function, this power is provided for urgent requirements, and the law thus made has an automatic expiry date.

Undermining the Doctrine of Separation of Powers

In the Kesavananda Bharati v State of Kerala case 1973, the Supreme Court listed the separation of powers as a “basic feature” of the Constitution.