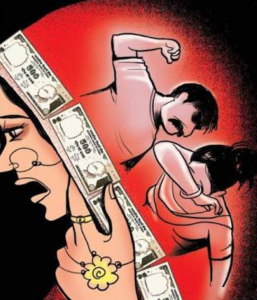 . We live in an age where moral outrage spreads faster over social media than you can blink, and yet a dowry death hardly moves the needle on our moral compass.

the Dowry Prohibition Act was passed 60 years ago. Nor for lack of education: Kerala has near-total literacy. And yet weddings continue to be lavish, with brides’ parents often taking loans and nearly bankrupting themselves.

In 2021, it is time to change these regressive social norms. Accepting dowry should be made a social stigma, and all generations should be addressed. Get superstars to endorse this along with their soap and soft drink endorsements. The young should also speak up. Women should flatly refuse to give dowry as part of marriage; men should refuse to take it, in any form. Why should parents of brides be forced into giving expensive “gifts”, which are really a dowry by any other name? Simple, inexpensive, dowry-less marriages should be normalised, rather than Bollywood-style extravaganzas spread over days.

The larger context for the practice of dowry is the poor presence of women in the workforce, and their consequent lack of financial independence. Women should be supported to take up jobs and have independent incomes. This means we should expand childcare and safe public transport, reduce discrimination in hiring, and create affirming workplace environments. At home, men should share domestic work and care responsibilities.

Discrimination pervades all aspects of life. States should look at gender-disaggregated data across the life cycle – birth, early childhood, education, nutrition, livelihood, access to healthcare, etc – to address gender inequality. Teachers and textbooks mould beliefs and values. Boys and girls should be systematically sensitized on the core value of gender equality.

As a larger initiative, laws and regulations should be screened to remove gender bias, replacing words like “manpower” with gender-neutral equivalents. In survey questionnaires, the “head of the family” is assumed to be male by default; husband and wife should be defined as joint heads. In some states, when a government employee dies, a job can be given to an eligible son or unmarried daughter – but not to a married daughter.