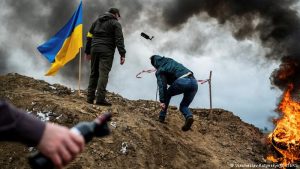 The Ukraine crisis has come to a head with Russia biting the bullet and launching “a full-scale invasion of Ukraine.”  Even as the United Nations Secretary-General was warning that the world was facing a “moment of peril” and calling for “restraint, reason and de-escalation” to avoid “a scale and severity of need unseen for many years”.

Russian troops that had massed on Ukraine’s borders for months now were preparing to launch an assault on Ukraine after Russian President recognised the Russian-backed, rebel-held areas of Donetsk and Luhansk as independent and even challenged the historical right of Ukraine to exist.

Biden’s leadership has been found wanting. For all his talk of leading through coalitions, all he has to show for is a disarray in the European ranks. Where Germany has been reluctant to allow North Atlantic Treaty Organization (NATO) allies to ship German-origin weapons to Ukraine, France has used this moment of crisis in trying to showcase its own leadership credentials. French President has been talking of the European Union taking decisions independent of the U.S. in an attempt to showcase its ‘strategic autonomy’.

The trans-Atlantic alliance has barely functioned despite all those who had argued that it was the fault of U.S. President Donald Trump fracturing this partnership. It turns out that even Mr. Biden has not been able to build the trans-Atlantic engagement around common objectives to be pursued collectively.

This ineffectual western response has emboldened not only Russia but also China as the focus of the West is in danger of moving away from the Indo-Pacific.  The Russia-China ‘axis’ is only getting stronger as the two nations seem ready to take on the West that seems willing to concede without even putting up a fight.  It allowed China to emerge as the leading global economic power and helped the U.S. in winning the Cold War.