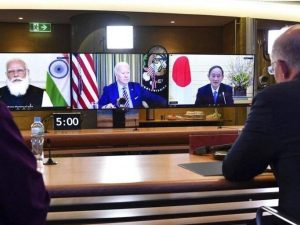 United States (US) President Joe Biden is credited with taking the initiative for the summit-level meeting of Quad that took place on March 12. Prime Minister Narendra Modi, too, thanked Biden for taking this initiative in his opening comments at the summit. This is the second high-profile foreign policy initiative taken by Biden in his first 100 days in office. Earlier, he addressed the Munich Security Conference on February 19 where he tried to win back European allies such as Germany, France and the United Kingdom, by proposing a transatlantic alliance to counter China. However, the mood in the European Union (EU) is not for confrontation with China. Both the German Chancellor Angela Merkel and the French President Emmanuel Macron seemed less enthusiastic about taking on China directly.

Biden’s next stop was Quad. Here too, his focus was to contain China. But he did not betray the aggression of his predecessor. The last time when the foreign ministers of Quad countries met in Tokyo, they could not even issue a joint statement, primarily because of the strident anti-China rhetoric of then US Secretary of State, Mike Pompeo. India was particularly reluctant to agreeing with the Obama-time vocabulary of “Free and Open Indo-Pacific — FOIP”. It insisted on adding another I — inclusive. India deserves credit that there was not only a joint statement this time, but it even stated that: “We strive for a region that is free, open, inclusive, healthy, anchored by democratic values, and unconstrained by coercion.”

Quad may not be a full-scale alliance yet, but a new “minilateral” is taking shape. Quad’s immediate focus on vaccines and sharing of responsibility was welcomed by India. India is already supplying 60% of the world’s vaccines. The initiative will further boost its vaccine manufacturing capacity. This could also pave the way for India to become the manufacturing destination for Quad countries, thus reducing dependence on China. Quad partners such as Japan and Australia were unhappy over India’s decision to stay out of the Regional Comprehensive Economic Partnership. If Quad emerges as an economic powerhouse, it will be beneficial to the entire region.