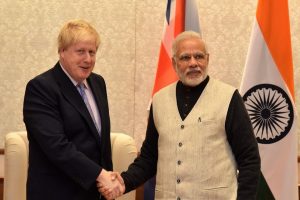 India and the United Kingdom share a modern partnership bound by strong historical ties. The bilateral relationship that was upgraded to a strategic partnership in 2004 and further strengthened by the successive government.

The possibilities range from ramping up vaccine production to the structuring of a strong public health system in India, the absence of which has been so terribly felt in the last few weeks. The current pandemic is neither the first nor will it be the last.

Even as it overcomes the current COVID wave, Delhi must seize the opportunities to work with its international partners in overcoming India’s failings that have been so mercilessly exposed in the last few weeks. Britain and the G-7 are well-positioned to help transform India’s internal capabilities as well as benefit from them in the management of future global pandemics.

While there is no way of fully separating South Asian and British domestic politics, Delhi’s problems have been accentuated by the British Labour Party’s growing political negativity towards India. For generations, Indian elites grew up thinking Labour was more empathetic towards India, while resenting the Conservative condescension.

The last three decades have seen an important turnaround. The Tories have become natural partners for Delhi, while Labour has become more meddlesome in India’s domestic politics. Here is a paradox: The Labour Party and its intelligentsia that never miss a chance to denounce the empire can’t seem to resist talking down to India. The Tories, who are certainly sentimental about the Raj era, are more open to seeing India in its own right. They are also more willing to view India through the prism of shared interests.