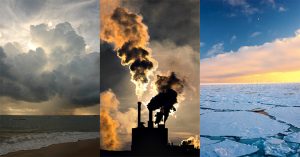 . Recently, India has been hit by two cyclones, first the Western Coast (Cyclone Tauktae) and then the eastern coast (Cyclone Yass). The increasing frequency of environmental hazards indicate the vulnerability owing to climate change.

However, the more concerning matter is the occurrence of overlapping hazards.For example, while the Yaas cyclone caused immediate damage, the flooding it induced took the adversity to a different scale altogether. Further, these environmental hazards happened in the middle of another mega hazard – the Covid-19 pandemic.

There is an urgent requirement on the part of the state – along with the non-state actors — to take immediate measures towards acknowledging the multiple risks that emanate from these overlapping hazards and reducing the same.

Floods In Ganga-Brahmaputra Plains: Flood months bring with themselves a typology of hazards associated with the geographical location of habitation and have differential effects. The typologies include:

As an outcome of the cyclone Yass and the Yaas-induced flooding, the affected witnessed many overlapping hazards. For example: 