‘Sufism’ is a term used to refer to mystical religious ideas in Islam. It had evolved into a well developed movement by the 11 century. Sufis, stress on the importance of traversing the path of the Sufi pir enabling one to establish a direct communion with the divine. Sufism or mysticism emerged in the 8 century and among the early known Sufis were Rabia al-Adawiya, Al-Junaid and Bayazid Bastami.

Sufism is deeply rooted with Islam and its development began in the late 7th and 8th centuries. The Sufis love their creator, cherish the desire of His closeness and follow His path. According to Islam, there are two types of service. Throughout the night, they remain in prayer, meditation and contemplation of Allah and throughout the day, they
serve His creatures especially human beings. 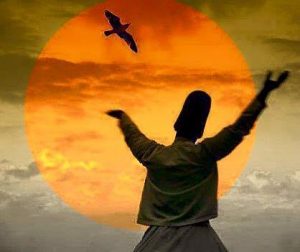 The following fundamental Principles of Sufism are found in Islam:-
i. Kashf is a source of knowledge.
ii. God is unique, eternal and all-pervading.
iii. The world is transitory.
iv. God is near to His creatures.

The khanqah (the hospice) was the center of activities of the various sufis orders.The khanqah was led by shaikh, pir or murshid (teacher) who lived with his murids (disciples). In time the Khanqahs emerged as important centres of learning and preaching. By the twelfth century the sufis were organized in silsilahs (orders). The word silsila meant chain and it represented signifying an unbreakable chain between the pir and the murid. With the death of the pir his tomb or shrine the dargah became a centre for his disciples and followers.

The major silisilahs in India were the Chisti, Qadri, Naqshbandi and Suharwardy Abul Fazl in Ain-i-Akbari gave a list of all that existed during his time, with some details leading Sufis

The Chishti order was founded in a village called Khwaja Chishti (near Herat). In India, the Chishti silsilah was founded by Khwaja Muinuddin Chishti (born c. 1142) who came to India around 1192. He made Ajmer the main centre for his teaching. He believed that serving mankind was the best form of devotion and therefore he worked amongst the downtrodden.

Suharwardi Silsila entered India at the same time as the Chishtis and its activities were confined to the Punjab and Multan.It was established in India by Bahauddin Zakanya. The Most well-known saints were Shaikh shihabuddin Suharwadi and Hamidud-din Nagori.

Naqshbandi Silsilah was established in India by Khwaja Bahauddin Naqshbandi. From the beginning the mystics of this Order stressed on the observance of the shariat and denounced all innovations or biddat. Sheikh Baqi Billah the successor to Khawaja Bahauddin Naqshbandi settled near Delhi, and his successor Shaikh Ahmad Sirhindi attempted to purge Islam from all liberal and what he believed were ‘un-Islamic’ practices. He opposed the listening of sama (religious music) and the practice of pilgrimage to the tombs of saints.