The Bhakti movement in Indian history represents a movement that popularized devotional surrender to a personally conceived supreme God. Its origins are traced to the Brahamanical and Buddhist traditions of ancient India. It was in south India that it grew from a religious tradition into a popular movement based on religious equality and broad based social participation. The movement led by popular saints reached its climax in the 10 century A.D.

The development of Bhakti movement took place in Tamil Nadu between the seventh andtwelfth centuries. It was reflected in the emotional poems of the Nayanars (devotees of Shiva) and Alvars (devotees of Vishnu).

The Bhakti movement in India was characterized by:-

(iii) the emergence of the low-caste non-literate’ persons like Rameja Dasar, Pillai Uranga, Villi Dasar and Kanak Dasar in the south and Kabir, Raidas, and Dadu in the north as great spiritual leaders. There was large scale participation of peasantry, artisans, and other lower classes as well as of ritually inferior but economically powerful groups like merchants and craftsmen in these devotional movements. 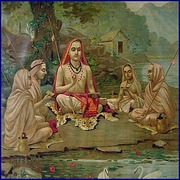 The term bhakti is defined as “devotion” or passionate love for the Divine. Moksha or liberation from rebirth was not in the following of rules, regulations or societal ordering, it was through simple devotion to the Divine. Within the movement at large, useful distinctions have been made by contemporary scholars between those poet saints who composed verses extolling God with attributes or form, namely, “saguna” bhaktas, and, those extolling God without and beyond all attributes or form, “nirguna.”

Some of the famous Bhakti Saints are:-