Human development is a process of enlarging people’s choices. The most critical ones are to lead a long and healthy life, to be educated and to enjoy a decent standard of living. Additional choices include political freedom, guaranteed human rights and self-respect.Human development has to be development of the people, by the people, for the people. Human development is about creating an environment in which people can develop their full potential and lead productive, creative lives in accord with their needs and interests.

The first Human Development Report was published in 1990,States human development as a process of enlarging people’s choices and enhancing their capabilities. The process concerns the creation of an enabling environment in which people can develop their full potential and live productive and creative lives according with their needs, interests and own values. In this sense, human development paradigm promotes well-being in a society.

The HDI was created to emphasize that people and their capabilities should be the ultimate criteria for assessing the development of a country, not economic growth alone. The HDI can also be used to question national policy choices, asking how two countries with the same level of GNI per capita can end up with different human development outcomes. These contrasts can stimulate debate about government policy priorities.
The Human Development Index (HDI) is a summary measure of average achievement in key dimensions of human development: a long and healthy life, being knowledgeable and have a decent standard of living. The HDI is the geometric mean of normalized indices for each of the following three dimensions:-

a. A long and healthy life, as reflected in life expectancy at birth.

b. The acquisition of education and knowledge, as reflected in the mean years of schooling (adjusted for out of school children) and literacy rate (age 7 years and above).

c. Th e standard of living and command over resources, as reflected in the monthly per capita expenditure adjusted for inflation and inequality.

India’s human development index (HDI) ranking for 2015 puts India ranked as 131 out of 188 countries. Asia’s third largest economy is among a group of countries classed as “medium” in the list, as opposed to “low” in the 1990s, which is largely due to an increase in life expectancy and mean years of schooling in the past 25 years.

(a) rapid increase in population 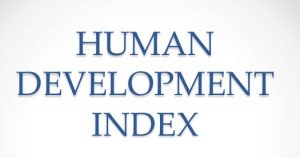