LANGUAGES  AND  LITERATURE  OF  TELANGANA

Telangana, as a geographical and political entity was born on June 2, 2014 as the 29th and the youngest state insouthern India. Telangana has an area of 112,077 square kilometres (43,273 sq mi), and a population of 35,193,978 (2011 census ).Telangana is bordered by the states of Maharastra to the north and north west, Karnataka  to the west, Chhattisgarh  to the north, Karnataka  to the west and Andhra Pradesh to the east and south.

Telangana had a history as the Telugu-speaking region of the princely state of Hyderabad, ruled by the Nizam of Hyderabad. Telangana State has long been a meeting place for diverse languages and cultures. It is easily the best example for India’s composite culture, pluralism and inclusiveness. Located on the uplands of Deccan plateau, Telangana is the link between the North and South of India and the capital Hyderabad is called as a ‘miniature India’. 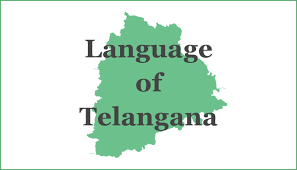 Some classical art forms received the royal patronage and attained finesse. However, the art forms of the innumerable communities spread across the length and breadth of the State give Telangana its distinct identity.The ubiquitous ‘DhoomDham’ is one such mixed evolution  and composite art form.  They generally were about the struggle and exploitation. Over time,  People adopted the old sensibilities of theatre and art changing the content as per the case and place.A  variant of Yakshagana, ChinduBhagavatham is performed widely across Telangana.

Historically it has been proved that if any society has experienced the everlasting development in terms of its literature, culture and heritage, it happened only when the rulers were committed enough to encourage, promote and support such growth .  The culture and literature of indigenous Telangana is long been ignored.  Hence, the only avenue to safeguard Telangana language and literature; to preserve the oldest traditions, heritage and cultural identity of Telangana; and to protect the self respect of Telangana poets, writers, artists, leaders and others is through political empowerment and government efforts to restore the glory of Telangana history.

Telugu (old name Tenugu)is official language of Telangana.Telugu is called north of  south and  south of north. Telugu language words dating back to 400 BC to 100 BC have been discovered in Bhattiprolu in the Guntur district of Andhra Pradesh. Hence, it is about 2000 years old language. Telugu script is an abguida which came from the Brahmic scripts and is used to write Telugu language.

Currently, Telugu is one of the few languages on the Indian list of official languages which is spoken by people in more than one state. There are about 74 million people who speak in Telugu throughout India making it the third language to be spoken the most here. Although there are many other Telangana languages such as Bengali,  and Hindi that have been taken from Sanskrit, Telugu is the only one that retains more of Sanskrit features when it comes to the pronunciation of consonants and vowels. Apart from these Lamabadi, Kannada, Gondi and Marathi are also modes of communication among the localites here.

After Telugu the other language that is most spoken by the people here is Urdu and 12% of the population speak this language here. That’s the reason  theTelangana government has accorded Urdu the status of First Language from earlier status of second official language in 2105, making it at par with Telugu.Now  students can opt for Urdu as first language, both in schools and higher education.

To promote Telugu language ‘Telangana Language Day’ is celebrated on September 9 every year. This day is chosen to commemorate a famous poet and writer of many languages KalojiNarayanaRao.

OFFICIAL LANGUAGES  AND  LITERATURE  OF  TELANGANA– “Telugu” has a very important past which dates back to A.D. 500 when there were just inscriptions. Although there were many poems and dramas that were narrated, Nannaya’s Mahabharata written in 1030 A.D marks the beginning of Telugu literature. 12th and 13th centuries saw Lingayata school of thought that were devotees of Shiva and this had much influence on Telugu literature. A famous and the first Telugu poet of Saiva wrote the famous ‘Kumara-Sambhavam’ . Many religious poets such as Jakkana, Potana and Gaurana that have contributed to the literature of Telugu in the 14th and 15th centuries.With television, media, press, newspapers, radio and movies the language bloomed to the modern Telugu that is spoken now.

The modern Telugu literature started with  the establishment of Andhra Jana Sangam in 1921 with the objective of establishing more libraries in Telangana region of the erstwhile Hyderabad State. It organised several conferences and established Telugu medium schools, reading rooms in order to spread literacy among the Telugus. During the first quarter of the 20th century, library movement in Telangana emerged as one of the most significant socio-cultural movements and contributed to public awakening.VattikotaAlwarswamy, known as the Father of TelanganaGrandhalayaUdyamam, single-handedly championed the cause of people’s library and literary movement. Libraries like  Krishna Deva Raya Andhra BhashaNilayam, Raja RajaNarendra Andhra BhashaNilayam, the credit for starting village and mobile libraries goes to VattikotaAlwarswamy.  He also established the DeshoddarakaGranthamala and published low-cost books and distributed them among the people.

Telugu is one of language included for Sahitya Academy Award. Apart from this Telangana government introduced B.N. Sastry memorial award for promotion  and dissemination of Telugu language.

Department of LANGUAGES  AND  LITERATURE  OF  TELANGANA is the state authority responsiblefor the development of Telugu literature and to set high literary standards and coordinate for the same reason among different department.