There are more than 160 folk Art forms of Telangana or Telugu land. Telangana has larger number of art forms performed by traditional artist communities. Most of them have “Tyaagam” tradition, that is a right to get cash and kind from respective communities. Some classical Art forms of Telangana received the royal patronage and attained finesse. However, the art forms of the innumerable communities spread across the length and breadth of the Telangana its distinct identity. While the Kakatiya rule led to evolution of dance forms such as Perini Sivatandavam,  also known as ‘dance of warriors’, the commoners, faced with the challenges of daily life developed traditions of story-telling coupled with solutions to tide over them through Golla Suddulu, Oggu Kathalu and Gotralu etc. Several art forms like above mingled and new forms emerged. The ubiquitous ‘Dhoom Dham’ is one such evolved and composite art form.  They generally were about the struggle and exploitation. People adopted the old sensibilities of theatre and art changing the content as per the case and place. A variant of Yakshagana, Chindu Bhagavatham is performed widely across Telangana. It is a theater art form that combines dance, music, dialogue, costume, make-up, and stage techniques with a unique style and form. The word ‘Chindu’ in Telugu means ‘jump’. As their presentation is interspersed with leaps and jumps, it gained the name of Chindu Bhagavatam. Most of the stories narrated are from ‘Bhagavatam’. Qawali, Ghazals and Mushairas evolved under the patronage of Qutub Shahi and the Asafjahi rulers in and around the capital city of Hyderabad.

Until the encroachment of electronic media these narratives and arts were the only source of recreation and education for the village folks. Each community had its own sub-community to narrate the stories or genealogies of the dominant community or caste. The sub-caste storytellers visit villages and narrate their stories. These storytellers are spread across the Telangana mostly in Nizamabad, Medak, Karimnagar, Warangal, Khammam Nalgonda and Mahabubnagar districts. These stories tellers were dependent on the dominant communities for survival. Some of these important narrative communities are:

Apart from these, there are also the non-caste specific teams such as batukamma teams, burrakatha teams, kolatam teams, and yakshganam teams. Depending on their traditional training the performance patterns and methods of presentation vary a great deal.

Methods of presentation of Art forms of Telangana:-

7.Single narrator, usually to the accompaniment of one or two musical instruments (e.g. Budige Jangam)

A quick examination of this oral literature gives an immense pride to the patrons and to the storytellers. But in the modern era, it has been seen as ‘primitive’ traditions. However, these stories emerge as a new area of knowledge in the twentieth century as embodying the entire panorama of traditional cultures, often carried through oral transmission, through performance and through material artifacts by the so-called ‘primitive people.’ But given the situation, due modernisation and globalisation oral literature and oral stories of these communities are disappearing. The oral stories are not alive because the listeners are dead. These storytellers are hardly seen in this modern era. However, Some thinker has a different story to tell. These oral traditions were neglected, side-lined and oppressed for the last six decades till 2000 because the rulers could not identify themselves with these rural art forms and appreciate the culture and sensibility of Telanganites. But during the Telangana movement and after emergence of the state, the greatest revival of these art forms have taken place. There was and is a cultural renaissance. Perini, Oggu Katha, Chindi Yakshagaanam, Hari Katha, Burra Katha, Sharda Kathalu have gained prominence again.

A compendium of tales, legends and stories:-

Some of the tales, legends and stories listed below are derived from the Ramayana, the Mahabharata and other all India epics and puranas but they are often characterized by a significant variation on the original stories. Some are pure extensions of the epic and puranic tales. According to an estimate there are also at least thirty caste-specific puranas in Telangana. The origin of these puranas and non-derivative narratives is difficult to trace but it may be conjectured that they originated in the prehistoric past and have been transmitted orally from generation to generation, mainly through the medium of the narrative communities. There are also legends describing the glory and valour of local heroes and village deities as do those of the presiding deities of certain temples where fairs are held annually. Chirutala, yaksha (yakshaganam), oggu, natakam, and Jangam (mentioned in parentheses against some of the following entries) denote the main narrative modes of those particular stories. The entries that have no parenthetical explanation may be understood to yield to a wide variety of presentation styles.

Patam means paintings. Patam katha are scroll narratives narrating stories of the Ramayana, the Mahabharata and the Puranas. Sometimes contemporary issues are also incorporated with mythological stories. There are around 12 forms of Patam katha.

With its roots set way back in history, it is generally performed by the Kuruma and the Yadava communities of Telangana who moved from place to place, narrating the stories of their caste gods. They tell the stories of Renuka Yellamma, Beerappa, Mallana and other rural deities. The tradition is also supported with certain dance moves, patnam (floor paintings) and is culminated with certain fetes or vinyasams.

Unlike Harikatha that is a tradition of the elite and educated, Buraktha is common people’s art form. It is known by different name in different regions; in Telangana, it is known as tamboorakatha, tandana katha and saradakatha. Most of the stories are kind of tributary to the freedom fighters. Bura is a musical instrument, a primitive form of mrudangam. The narratives, mostly derived from Ramayan and Mahabharat are told using the instrument.

Attached to the Malas and the narratives recite the gotras and genealogy of the Malas.

They recite episodes of the Ramayana while playing Chirutha

It is a community related oral tradition related to Gaura community

A large majority of these tales and legends are not available in recorded form—written, taped or filmed—and therefore the need to record, compile and preserve them before they are lost forever. Some research has certainly gone into this aspect of the Telangana culture as is evidenced by these scholarly works: Bigicharla Krishna Reddy’s Janapada Nrityakala, Nayani Krishnakumari’s Janapada Geya Gathalu: Nrusastra Vignanamu, G.V.S. Mohan’s Janapada Vignana Vyasavali, Mikkilineni Radhakrishna Murthy’s Teluguvari Janapada Kalaroopalu, Biruduraju Ramaraju’s Janapada Geya Sahityamu, and R.V.S. Sundaram’s Andhrula Janapada Vignanamu. Although these studies are significant as critical analyses of the folk art forms, they cannot be said to have done much by way of recording and rendering in Telugu or English the tales and legends as highly readable texts.  Therefore for the purpose of preserving these narrative arts the surviving members of the communities practising them should be located and their cooperation should be enlisted in recording the narratives on audio tapes and VCDs. After recording, these narratives should be transcribed and reduced to readable texts in Telugu and possibly even translated into English so as to give them an all India currency. Finally the materials so obtained should be carefully documented with detailed introduction to each of them and archived.

Architecture of Art forms of Telangana:-

Architecture in Telangana covers the monuments that were built in the later half of 10th Century to 12th Century. In this time, the Chalukyas and Kakatiyas rule the region which is now known as Telangana, the newly formed state in India with Hyderabad as its capital. During the rule of Kakatiya Dynasty and the Chalukyas of Badami, the art and architecture of Telangana reached at its height. In this time, some of the architectural monuments like Thousand Pillar Temple, Alampur Temples, Ramappa Temple and many other temples. The temples of Telangana and the forts like Warangal Fort and Bhongir Fort were built during the time of Nizams and Mughals. During the rule of Golconda Kings, the Golconda fort was made where one can see the excellence of artistic beauty of Mughal times. 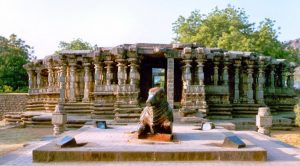 Kakatiyan style of architecture of the 12th century. It was destroyed by the Tughlaq dynasty during their invasion of South India. It consists of one temple and other building. There are one thousand pillars in the building and the temple, but no pillar obstructs a person in any point of the temple to see the god in the other temple.

Architecture in Telangana Temples of Alampur:-

It lies in a valley at Palampet village of Venkatapur Mandal, in erstwhile Mulug Taluq of Warangal district, a tiny village long past its days of glory in the 13th and 14th centuries. An inscription in the temple dates it to the year 1213 and said to have been built by a General Recherla Rudra, during the period of the Kakatiya ruler Ganapati Deva. This medieval temple is a Shivalaya (where Shiva is worshipped) and named after the sculptor Ramappa. It is the only temple in the world named after its sculptor/architect. Its presiding deity, Ramalingeswara, is the form of Shiva and a personal god of the Avatar of Vishnu, Rama. The history says that it took 40 years to build this temple. Planned and sculpted by Ramappa, the temple was built on the classical pattern of being lifted above the world on a high star-shaped platform. Intricate carvings line the walls and cover the pillars and ceilings. Starting at its base to its wall panels, pillars and ceiling are sculpted figures drawn from Hindu mythology.The roof (garbhalayam) of the temple is built with bricks, which are so light that they are able to float on water.

Telangana Talli is a symbolic mother goddess for the people of Telangana. It was adopted by the people of the regions in Telangana as a representation of the Goddess similar to Telugu Talli. The statue is distinct, with a bathukamma in one hand and corn in the other. Byroju Venkataramana Chary designed Telangana Talli statue. He was awarded by Chief Minister K Chandra Shekhar Rao on the eve of independence day in year 2015 for his dedication. He hails from Nirmal city of Adilabad district.

Telangana Martyrs Memorial also called as Gun Park is a monument built for 369 students who died during 1969 agitation for a separate Telangana state. Telangana Martyrs Memorial day would be observed on 2 June every year in all the districts of Telangana State.It is situated near the Public Gardens, Hyderabad. The monument, also called ‘Gun Park’ because of government use of guns against demonstrators, is symbolic for Telangana agitation, and a focus for political activity highlighting issues relating to the Telangana region. The monument was designed and built by Aekka Yadagiri Rao, a “nationally acclaimed sculptor,” and former JNTU Professor of Sculpture.