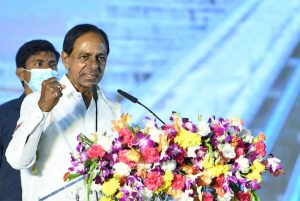 An Introduction of Telangana Economy

Telangana state was formed in June 2014 post the split of erstwhile Andhra Pradesh. The earlier capital city of Hyderabad is part of Telangana. The state holds an advantage as it possesses readymade capital with necessary infrastructure and ecosystem.

The year 2021-22 was one of economic revival, with the state as well as the national economy rebounding, and achieving a ‘V-shaped’ recovery. The country’s GDP at constant (2011-12) prices grew by 8.9%, while that of the state grew by 11.2% – higher than the country’s by 3.6 percentage points. At current prices, Telangana’s GSDP grew by 19.1% in 2021-22. Thus, the state economy was resilient to the challenges imposed by the COVID-19 pandemic

The agriculture and allied sectors in the state remained strong throughout the pandemic and after, achieving a robust growth in current price GVA of 12.24% and 9.09% in 2020-21 and 2021- 22, respectively.Telangana’s economy was long dominated by agriculture, notably the production of rice. The state’s rivers, particularly the Godavari and the Krishna, have been tapped to provide irrigation for the dry interior, although many areas still depend on the somewhat unpredictable monsoon rainfall. In addition to rice, other important crops are corn (maize) and cotton. The Nagarjuna Sagar multipurpose dam project on the border with Andhra Pradesh, which diverts the waters of the Krishna for irrigation, has substantially increased the production of rice and sugarcane. Rice flour, rice-bran oil, paints and varnishes, soaps and detergents, cardboard and other packaging materials, and cattle feed are all produced from local paddy rice. Other agricultural commodities include chili peppers, sorghum, pulses (peas, beans, and lentils), castor beans, and peanuts (groundnuts), as well as a variety of tropical fruits. Livestock raising and aquaculture are also important, each accounting for a small but still significant component of annual economic output. The state’s woodlands annually yield high-quality timber, such as teak and eucalyptus. Non-timber forest products—including sal seeds (from which an edible oil is extracted), tendu leaves (for rolling cigarettes), gum karaya (a type of emulsifier), and bamboo—are also important. The state government initiated a major reforestation program.

Among Telangana’s principal mineral resources are coal, limestone, quartz, granite, feldspar, dolomite, and barite. The diamond mines of the Golconda Plateau were once renowned worldwide for producing the Koh-i-noor diamond and other famous stones; efforts have been made to revive production in the area. Most of Telangana’s energy is produced by thermal generators in the public sector, with hydroelectric power stations providing an important secondary source of energy. In addition, the government has taken steps to develop wind and solar energyproduction.

Industrial sector in Telangana experienced a decline in GVA (growth rate of -1.73%) at current prices in 2020-21, the sector grew at a notable 20.23% in 2021-22 (AE). Several major manufacturing and services industries are in operation mainly around Hyderabad. Automobiles and auto components industry, spices, mines and minerals, textiles and apparels, pharmaceutical, horticulture, poultry farming are the main industries in Telangana.

In terms of services, Hyderabad is usually nicknamed as Cyberabad due to its information technology foray and location of major software industries in the city. Prior to secession, it contributed 15% to India’s and 98% to Adhra Pradesh’s exports in IT and ITES sectors last 2013 With Hyderabad as in the front line of Telangana’s aims to promote information technology in India, the city boasts the HITEC City as its premier hub.

Power of Telangana
Availability of quality power is indispensable for improving living standards and the growth of economy. State Government aimed at providing at least 9 hour a day free power supply for agricultural purpose and uninterrupted power supply for industrial and domestic consumption.

Telangana has the fourth-highest per capita availability of power in the country at 1,905 kWh as of 2020-21.

Tourism is a significant sub-sector under the services sector of Telangana. The Ramappa temple and Pochampally village gained world-wide recognition as a UNESCO World Heritage Site and a UNWTO Best World Tourism Village in 2021, respectively.Tourism is now one of the world’s largest industries and one of its fastest growing economic sectors. Tourism may have a positive economic impact on the balance of payments, employment, gross income and production

Telangana is not only Hyderabad but, also offers the heritage site of the Kakatiya Fort, Rammappa Temple and the Thousand pillar temple at Warangal; for the Spiritually inclined, Lord Sri Ram Temple at Bhadrachalam, Heritage of Hyderabad and Warangal will be our focus area apart from the ancient temples at Yadrigutta, Vemulawada, Bhadrachalam, etc.