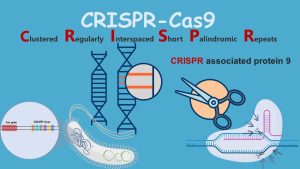 CRISPR is a dynamic, versatile tool that allows us to target nearly any genomic location and potentially repair broken genes. It can remove, add or alter specific DNA sequences in the genome of higher organisms.

CRISPR (Clustered Regularly Interspaced Short Palindromic Repeats) are sections of DNA and are sections of genetic code containing short repetitions of base sequences followed by spacer DNA segments. CAS-9 (CRISPR-associated protein 9) is an enzyme. It uses a synthetic guide RNA to introduce a double strand break at a specific location within a strand of DNA. It is a system used by bacterial cells to recognize and destroy viral DNA as a form of adaptive immunity.

CRISPR scans the genome looking for the right location and then uses the Cas9 protein as molecular scissors to snip through the DNA. Cas9 endonuclease – guide RNAs to direct it to a particular sequence to be edited. The genetic sequence of the RNA matches the target sequence of the DNA that has to be edited.

In the 2016 Worldwide Threat Assessment of the US Intelligence Community statement United States Director of National Intelligence, James R. Clapper, named genome editing as a potential weapon of mass destruction, stating that genome editing conducted by countries with regulatory or ethical standards “different from Western countries” probably increases the risk of the creation of harmful biological agents or products.

Low cost and accelerated pace of development of this technology and its deliberate or unintentional misuse might lead to far-reaching economic and national security implications. It could lead to the manufacture of biological weapons by potential bioterrorists who might use the knowledge to create vaccine resistant strains of other pox viruses, such as smallpox, that could affect humans.