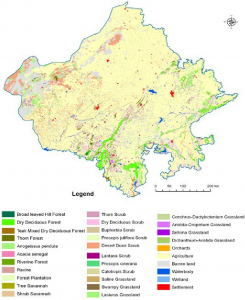 The state of Rajasthan is endowed with a wealth of a wide range of vegetaion. They can be discussed in two broad categories i.e. into two distinct groups – one comprising the arid vegetaion, falling into western part of the state while the other belonging to semi-arid to sub humid of eastern and southern Rajasthan.

Being largely influenced by edaphic and biotic factors, the western Rajasthan is characterized by sparse vegetation. Vegetation of this arid tract has well adapted to existing arid conditions. The potential vegetation of this region has been modified due to intense biotic factors. The vegetation of western Rajasthan has been grouped under the following categories based on two prominent indices i.e. density and frequency. These have been used to identify the dominant and co-dominant species of vegetation.

It is represented in the area of large stabilized longitudinal, parabolic and transverse dunes having the lowest rainfall zone (10 to 15cm). Only shrubs an under-shrubs which are well adapted to prevailing conditions are predominant in this tract. This region is represented by psammophytic Scrub Desert Vegetation. Phog is the major dominant shrub on the dunes in Barmer region while it is associated with Haloxylon in Jaisalmer tract.

A distinct habitat of good vegetation along runnels and scanty vegetation in small pockets of soil deposition is represented on the vast rocky plateau of Jaisalmer. Salvadora is the dominant species on this rocky areas with negligible soil cover, here euphorbia caducifilia (Thor) form the main associate. Many other lithophytes forming shrubs colonize the tract.

The exposed and buried pediments and gravelly plains of Jaisalmer with poor sandy loam or loamy and soil cover allow highly adapted species to colonize this habitat. Due to the adaptive capability to the adverse desertic conditions Ziziphus and Capparis are present here. In many regions, largely scattered stunted tree species of Prosopis and Acacia etc are prevalent. The limited associated species of the lithophytic Scrub Desert are also present.

This type of vegetation is generally present in low lying saline basin and depressional areas, with one percent slope. In western Rajasthan, these are located at Malhar (Jodhpur), Pachpadra, Uterlai, Thob (Barmer) Lawan, Pokhran etc. mostly Suaeda dominates these tracts.

The region is dominated by Trees – Prosopis cineraria, Tecomella undulate etc. and Shrubs – Capparis deciduas, Calotropis procera etc. Large part of the flat plains in 25 to 30 cm rainfall zone is dominated by this type which covers the older alluvial plains and buried pediment plains. Due to cultivation the natural vegetation of this zone is highly modified.

The Eastern Zone constitutes the plains, valleys, deeply buried or exposed pediment plains and the Aravalli range. The zone lies in the region which receives rainfall between 50 and 80 cm. The plains lie in the double cropping region and hence the existing vegetation is largely modified due to cultural interferences. Degraded vegetation is present on the rocky wastelands, which is a result of the high biotic impact.

Acaica leucophloea dominates the shallow to moderately deep, buried and exposed plains whereas A. nilotica is the main species in the plains with deep soil in western part of Jaipur, Tonk, Alwar and Bhilwara district along with Jaisamand and Ajmer and north western Udaipur. Plains show sparse tree density as the region is extensively cultivated. Prominent Trees are – Acacia leucophlea, A. Senegal, A. nilotica, Aegle moremlos, Azadirachta indica Balanites aegyptiaca, Ficus bengalensis,

On the north east, east and south east of the Aravalli range the alluvial plains are largely under double cultivation and dominated by this type of specie. The density of trees is general limited due to cultivation but they exhibit good growth due to good irrigation. Dominate Trees – Acacia nilotica, A. cupressiformis, Azadirachta indica, Mangifra indica, Madhuca indica, Phoneix sylvestris, Ziziphus maauritiana, Ailantl excels, Ficus bengalensis,

This vegetation type is present at dissected ravine terrain along the Chambal Valley covering Dholpur, Sawai Madhopur and Kota districts. This dissected upland has dry situation where as at all lower level, the flat land experiences fast flow of water.

Some important species of this type distributed in this zone are: Butea monosperma, Anogeissus, Moringa concanensis, Anogeissus latifolia, Magnifera indica, Sterculia urens etc. This type of vegetation is present at Mount Abu and the composition of this vegetation is the reflection of the change in them due to the increase in altitude. The region supports dry deciduous, semi-deciduous and evergreen species of plants.