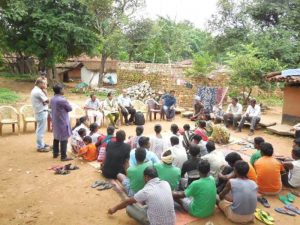 Local self-government implies the transference of the power to rule to the lowest rungs of the political order. It is a form of democratic decentralization where the participation of even the grass root level of the society is ensured in the process of administration.

The village panchayat, as a system of administration, began in the British days, as their offer to satisfy the demands for local autonomy. They opened up the governance of the lowest levels to the citizens. The GoI act, 1935 also authorizes the provinces to enact legislations.

Originally appointed by the Government of India to examine the working of two of its earlier programs, the committee submitted its report in November 1957, in which the term ‘democratic decentralization‘ first appears.

Rajasthan (1959) adopted the system first, followed by Andhra Pradesh in the same year. Some states even went ahead to create four-tier systems and Nyaya panchayats, which served as judicial bodies.

The committee was constituted by the Janata government of the time to study Panchayati Raj institutions. Out of a total of 132 recommendations made by it, the most important ones are:  Three-tier system to be replaced by a two-tier system. Political parties should participate at all levels in the elections. Compulsory powers of taxation to be given to these institutions. Zila Parishad to be made responsible for planning at the state level.

The acts of 1992 added two new parts IX and IX-A  to the constitution. It also added two new schedules – 11 and 12 which contains the lists of functional items of Panchayats and Municipalities. It provides for a three-tier system of Panchayati Raj in every state – at the village, intermediate and district levels.