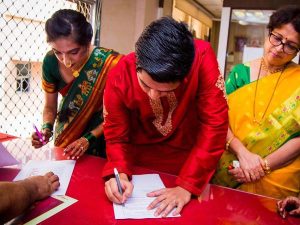 After the 2018 amendments to the Prevention of Corruption Act, 1988, the Centre has come to exercise power over the CBI not just administratively, but also legally.  In 2018, the government pushed through Parliament amendments to Section 17A of the Act making it mandatory for the CBI to seek the Centre’s permission before registering a case of corruption against any government servant.

In India, the man-made demarcations of caste, religion, culture play a predominant role in the matters of marriage. Customary marriages in India take place within the caste and faith to which the couple belongs to. Those nuptials which challenge this norm of Indian society are considered socially unacceptable and irreligious. But the Special Marriage Act, 1954 works towards granting legal validity to those marriages where the two consenting parties belong to different faiths or castes. It lays down the procedure through which such marriages are granted legal credibility. However, this paper seeks to analyze the procedure through which the ‘special marriages’ takes place and highlights the anatomy of the problems pertaining to the same in the light of recent Indian social developments and modernization.

It scrutinizes the problems with great precision and meticulously lays down the modification which is absolutely necessary to make the Act undeniably efficient and scale down the threat of honour killings, violence, coercion the intended couple is subjected to by the community. The paper also seeks to shed light on the growing magnitude of caste endogamy and casteism which is having an adverse impact on the inter-caste and inter-religious marriages in India. The major objective of the paper is to provide an insight into the challenges associated with the implementation of the Special Marriage Act, 1954.