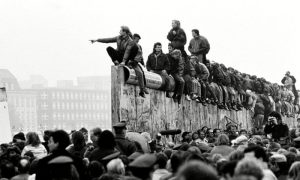 The Berlin Wall was a barrier that existed from 1961 through 1989, constructed by the German Democratic Republic (GDR, East Germany). Fall of the Berlin Wall (1989) is a major event in European History. The policies of restructuring and openness initiated by Soviet leader Mikhail Gorbachev paved way for the destruction of the symbolic physical barrier. Within two years, the mighty USSR too disintegrated.

Fall of Berlin led to further changes in other socialist countries, the unification of Germany, and finally the collapse of Soviet Union itself in 1991. Marked the end of Soviet supported authoritarian regimes in Eastern Europe. Immediately after these changes about 30 countries in the former Soviet Union and Central-Eastern Europe started their political and economic transition towards democracy and market economy. Liberal, capitalist and democratic system emerged as the major doctrine across the world.

Some of these countries have become members of Western institutions and organizations like the European Union (EU), North Atlantic Treaty Organization (NATO) and Organization for Economic Cooperation and Development (OECD). In most of these countries, citizens enjoy higher living standards and broader political and personal rights. The majority of citizens in the former socialist countries do not want to go back to earlier economic and political system.