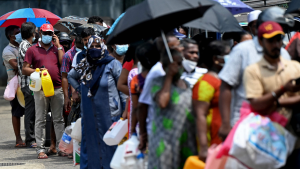 The Sri Lankan economy has been facing a crisis owing to a serious Balance of Payments (BoP) problem. Its foreign exchange reserves are depleting rapidly and it is becoming increasingly difficult for the country to import essential consumption goods.  The current Sri Lankan economic crisis is the product of the historical imbalances in the economic structure, the International Monetary Fund (IMF)’s loan-related conditionalities and the misguided policies of authoritarian rulers.

When Sri Lanka emerged from a 26-year long civil war in 2009, its post-war GDP growth was reasonably high at 8-9% per annum till 2012. However, its average GDP growth rate almost halved after 2013 as global commodity prices fell, exports slowed down and imports rose. Sri Lanka’s budget deficits were high during the war and the global financial crisis of 2008 drained its forex reserves which led to the country borrowing a loan of $2.6 billion loan from the IMF in 2009. It again approached the IMF in 2016 for another US$1.5 billion loan, however the conditionalities of the IMF further deteriorated Sri Lanka’s economic health.