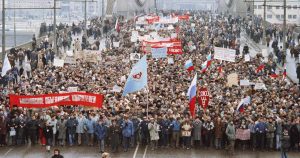 The Revolutions of 1989 were part of a revolutionary wave that resulted in the Fall of Communism in the Communist states of Central and Eastern Europe. The period is sometimes called the Autumn of Nations. There were many revolutions in the period 1989 to 1992, against the existing communist governments in Europe.

There were mass protests, many communist governments started to fall in countries like Poland, Hungary etc (1989). Revolutions in East Germany resulted in the fall of Berlin Wall in 1989 November. Revolutions didn’t end there, it went on disintegrating the mighty USSR (1991).

Anti-communist movements in the period 1989-1992 in many nations – Poland, Bulgaria, Czechoslovakia, Hungary, Romania, Russia and even China – toppled many of the authoritarian regimes in Europe, establishing capitalist, liberal democracies. Most of the mass movements were non-violent. Romania was an exemption. The anti-communist movements gained success in most countries, but it was suppressed in China.