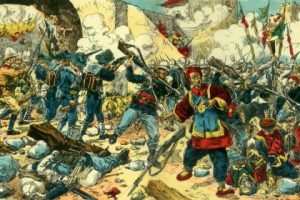 The Boxer Rebellion or Yihetuan Movement was a violent xenophobic and anti-Christian movement which took place in China towards the end of the Qing dynasty between 1898 and 1900. It was initiated by the Militia United in Righteousness (Yihetuan), known in English as the “Boxers”, and was motivated by proto-nationalist sentiments and opposition to foreign imperialism and Christianity. The Great Powers intervened and defeated Chinese forces.

The Boxer Rebellion ended formally on September 7, 1901 with the signing of the Boxer Protocol.  The Boxer Protocol was an agreement between the Qing Empire of China and the Eight Nation Alliance. It contained many clauses, but the most significant included provisions for punishment against China and the Boxers, as well as protections for the foreign nations going forward.

As part of the agreement, the Qing government was to pay 450 million taels (Chinese system of measurement) of silver to the countries of the Eight Nation Alliance  over a period of 39 years.  At the time, this was equivalent to around $330 million USD.  As well, the Boxer Protocol gave the foreign powers the ability to place their forces in Peking on a continuous basis.