After the fall of the Mauryan Empire, the history of the Andhras, as a continuous account of political and cultural events, commences with the rise of the Satavahanas as a political power. According to Matsya Purana there were 29 rulers of this dynasty. They ruled over the Andhradesa including Deccan for about 400 years from the 2nd century B.C. to beyond the 2nd century A.D. Satavahanas were also called Salivahanas and Satakarnis. In the 3rd century B.C., Simukha, the founder of the Satavahana dynasty, unified the various Andhra principalities into one kingdom and became its ruler (271 B.C. – 248 B.C.). Dharanikota near Amaravati in Guntur district was the first capital of Simukha, but later he shifted his capital to Pratishtana (Paithan in Aurangabad district).

Satakarni II, the sixth ruler of the dynasty (184 B.C.) was an able ruler who extended his kingdom to the west by conquering Malwa. According to inscriptional evidence, he extended the boundaries of his realm far into central India across the Vindhyas, perhaps up to the river Ganges. He ruled for a long period of 56 years. The long reign of Satakarni II was followed successively by eight rulers of whom none can be credited with any notable achievement. It was the accession of Pulumavi I that brought renewed strength and glory to their kingdom. He struck down the last of the Kanva rulers, Susarman, in 28 B.C. and occupied Magadha. The Satavahanas thus assumed an all-India significance as imperial rulers in succession to the Nandas, Mauryas, Sungas and Kanvas. The kings, who succeeded him, appear to have been driven, by the Sakas, out of Maharashtra back to their home land in Andhra. The only silver lining in that murky atmosphere was the excellent literary work, Gathasaptasati, of Hala, the 17th Satavahana king.

The Satavahanas followed the administration guidelines of the Shastras. Their government was less top-heavy than that of the Mauryans, and featured several levels of feudatories: Rajan, the hereditary rulers Rajas, petty princes who struck coins in their own names Maharathis, hereditary lords who could grant villages in their own names and maintained matrimonial relations with the ruling family Mahabhojas Mahasenapati (civil administrator under Pulumavi II; governor of a janapada under Pulumavi IV) Mahatalavara (“great watchman”) The royal princes (kumaras) were appointed as viceroys of the provinces. The ahara appears to have been the largest geographical subdivision of the Satavahana polity. Several inscriptions refer to aharas named after the governors appointed to rule them (e.g. Govardhanahara, Mamalahara, Satavanihara and Kapurahara). This suggests that the Satavahanas attempted to build a formal administrative and revenue collection structure.  The inscriptions of Gautamiputra Satakarni suggest the existence of a bureaucratic structure, although it is not certain how stable and effective this structure was. For example, two inscriptions from Nashik Cave 11 record donations of agricultural land to ascetic communities. They state that the ascetics would enjoy tax exemption and non-interference from the royal officials. The first inscription states that the grant was approved by Gautamiputra’s minister Sivagupta on the king’s verbal orders, and preserved by the “great lords”. The second inscription records a grant by Gautamiputra and his mother, and mentions Syamaka as the minister of the Govardhana ahara. It states that the charter was approved by a woman named Lota, who according to archaeologist James Burgess’ interpretation, was the chief lady-in-waiting of Gautamiputra’s mother. The Satavahana-era inscriptions mention three types of settlements: nagara (city), nigama (market town) and gama (village). 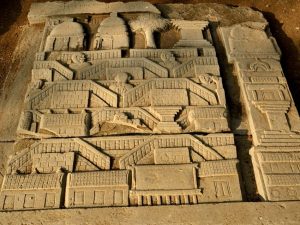 The Satavahanas participated in (and benefited from) economic expansion through intensification of agriculture, increased production of other commodities, and trade within and beyond the Indian subcontinent. During the Satavahana period, several large settlements emerged in the fertile areas, especially along the major rivers. The amount of land under agricultural use also expanded significantly, as a result of forest clearance and construction of irrigation reservoirs.  The exploitation of sites with mineral resources may have increased during the Satavahana period, leading to the emergence of new settlements in these areas. Such sites facilitated commerce and crafts (such as ceramic ware). The increased craft production during the Satavahana period is evident from archaeological discoveries at sites such as Kotalingala, as well as epigraphic references to artisans and guilds. The Satavahanas controlled the Indian sea coast, and as a result, they dominated the growing Indian trade with the Roman Empire. The Periplus of the Erythraean Sea mentions two important Satavahana trade centres: Pratishthana and Tagara. Other important urban centres included Kondapur, Banavasi and Madhavpur. Nanaghat was the site of an important pass that linked the Satavahana capital Pratishthana to the sea.

Several Brahmi script inscriptions are available from the Satavahana period, but most of these record donations to Buddhist institutions by individuals, and do not provide much information about the dynasty. The inscriptions issued by the Satavahana royals themselves also primarily concern religious donations, although some of them provide some information about the rulers and the imperial structure.  The earliest extant Satavahana inscription is from Nashik Cave 19, which states that the cave was commissioned by Mahamatra Saman of Nashik during the reign of king Kanha. At Naneghat, an inscription issued by Nayanika, the widow of Satakarni I, has been found. It records Nayanika’s lineage and mentions the Vedic sacrifices performed by the royal family. Another inscription at Naneghat comprises names of Satavahana royals, appearing as labels over their bas-relief portraits. The portraits are now completely eroded, but the inscription is believed to be contemporary to Nayanika’s inscription on a paleographic basis.The next oldest Satavahana-era inscription appears on a sculpted gateway element of Stupa 1 at Sanchi. It states that the element was donated by Ananda, who was the son of Siri Satakarni’s foreman of artisans. This inscription is probably from the reign of Satakarni II.